A farmer with a difference 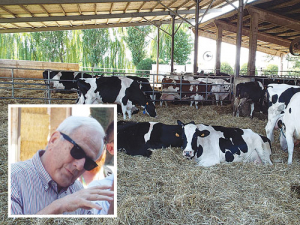 Each cow on this Italian farm produce 790kg/ms every season. Inset: Dario Soresina.

Given that the average farm size in northern Italy is 9.8ha, the operation run by Dario Soresina and his family at Crema, just south of Begamo, makes him a slightly different type of dairy farmer.

Dario has a background in engineering and loves all things mechanical.

Members of a Power Farming Europe study tour group visited the farm on a sunny day in mid July.

Dario and his wife Bernedetta farm 75ha (eff), of which 30ha is used to grow forage maize and the rest grass. In a good season, up to six cuts of grass are conserved as high quality silage.

The farm carries 200 large-frame Holstein dairy cows and 200 followers, housed indoors year-round except for cows due to calve, which have access to outdoor areas for two months prior to calving.

All animals are fed a complete ration, delivered by a self-propelled mixer wagon; this high quality maize and grass silage is fed out three times a day.

Cows are milked in a 20-point rotary shed at about 80 animals per hour with no in-parlour feeding; typically they produce 9500L (790kgMS) per season. The milk-price in June 2017 was Euro 0.375/L, suggesting the gross output per cow fetches NZ$5600 at today’s exchange rate.

Soresina spends large on mechanisation and dairying is only part of the overall picture; his eyes light up when he starts talking about his impressive biogas installation, commissioned in 2011 at a set-up cost of Euro 3.5 million, funded by a grant from the EU.

The plant produces 5 million kWh of electricity annually (enough for a town of 1500 people), sold to the local electricity company for Euro 1.5 million. Biogas heats the farmhouse, powers the dairy shed and heats water to 70oC.

A subsidy of Euro 0.28 is paid for every kWh produced, a deal struck for 15 years provided 50% of the biomass needed to feed the system is home produced.

Fermentation produces methane in a 4 million m3 digester, which in turn powers a diesel engine to run a generator. Waste digestate is stored in two 2m m3 holding tanks; this can be irrigated on surrounding maize ground or screened to remove solids which are used for soil conditioning.

The plant and process are controlled automatically and there is no odour; and other than the diesel engine/generator plant, which is heavily soundproofed, there is very little noise.

The size of the plant requires biomass feedstock to be brought from neighbouring farms. Home farm expansion is stymied by the fact that land rarely comes up for sale in the area, and if it does it commands Euro 76,000/ha ($121,000).

• Mark Daniel travelled to Italy as a guest of Power Farming Group.

The stars and stripes are in our future

Recently there has been considerable media coverage of the news that New Zealand wine has become the number three imported wine into the US, with only France and Italy ahead of us.