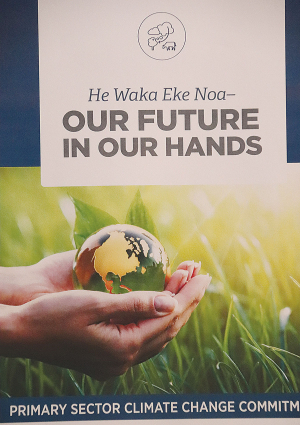 OPINION: The united and unprecedented stand taken last week at Parliament was historic.

It brought together farmers, growers and other related sectors seeking to solve the vexing problem of agricultural emissions.

Eleven different groups, including Maori, took a united position on climate change, even daring to challenge one recommendation by the Independent Climate Change Commission (ICCC) set up to advise the Government.

Faced with a hijacking of the climate change issue by greenies and others, the agri sector got its act together in style.

They produced the document He Waka Eke Noa – Our Future in Our Hands, which fairly summarised their intent.  They stated their collective commitment to working with the Government in good faith to deal with climate change.

They acknowledged the urgent need for change and pointed out that farmers, horticulturalists, processors and others have not been idle but have spent huge sums of money and much time on searching for solutions to the many challenges.

Given that the sector intends to be part of the solution, we hope the Government will sensibly listen to its suggestions.

They have quite rightly given a thumbs-down to the ICCC rather bluntly recommending an arbitrary levy on farmers at processor level – meat and dairy companies and the like. This would be too disconnected from farmers to effect the behaviour changes needed on farm to deal with emissions, they said.

The groups instead favour developing closer relationships with farmers so as to bring them onboard as part of the solution.

Climate change is complicated, and for farmers to buy into the solution they need coaching and helping on a personal level. The Government may be wise to accept this offer if they are serious about working with farmers.