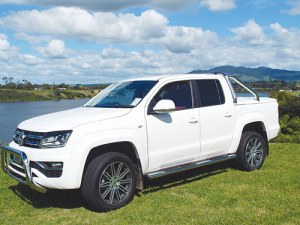 Though pricey, as all flagship models are, with a V6 pumping out 165kW of power and delivering 550Nm torque, it is smoother, pulls better than James Bond and gets even better when the over-boost delivers 180kW and 580Nm. This occurs when the throttle is set at more than 70%, the speed is above 50km/h, and it lasts for about 10 seconds, so is great for overtaking on the open road: 100km/h comes up in 7.9 seconds. Stopping is by industry-leading disc brakes on each corner.

Interestingly, towing capacity remains unchanged at 3000kg, but even with that maximum load on the towbar the eight-speed transmission is a joy, and leads the field with its silky-smooth shifts, which can be hurried up by moving to the S-mode on the shift lever, or the wheel-mounted paddle shifters. This reviewer let the technology do its thing and came away suitably impressed.

The ride, as enjoyed in the previous incarnation, was comfortable and compliant and didn’t have the normal tendency of utes to feel over-sprung when the load bay is empty – none of that ‘twitchy’ feel. Whether or not this is because the rear leaf springs are set outside the chassis rails, we don’t know.

Permanent 4WD with a centre Torsen differential makes cornering sure-footed, though some reviewers question the lack of 2WD. But the technology delivers a drive split favouring 60:40 rear to front as normal, shifting to 80:20 under hard acceleration or 40:60 when there’s soft stuff under the wheels.

At the business end the load tray is the largest out there: 1555mm long, 1620mm wide and 508mm deep. Importantly, the distance between the inner wheel arches is 1222mm, no doubt helped by the wide-spaced springs, and accommodating standard Euro pallets. Vertically-challenged folk might find the 780mm load height a bit of a reach.

The cab is wide and airy, and the front seat jockeys get great seats, great instrumentation and a good climate package.

So is it worth the price ticket? A resounding yes! The opposition might point out that even at this level the Amorak V6 misses out on some hi-tech gizmos like blind-spot monitoring, lane departure warning and adaptive cruise control. Is that a problem? Maybe, but not for this driver who likes to drive, and is a follower of the KISS doctrine.

One thing’s for sure, if you want to get from A to B quickly and smoothly while leaving the others in your dust, look no further.

Living up to its big reputation

At a recent vehicle launch I mentioned to a fellow journalist that I was getting the Volkswagen Passat Alltrack to test and he replied "you'll enjoy it".

The VW Amarok has always had a following of ute buyers wanting something different from the norm.