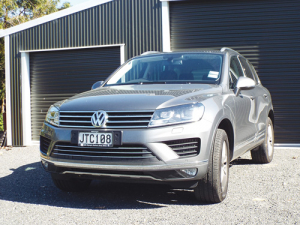 For example, the Volkswagen Touareg name originates in the name of the Tuareg people of North Africa, pastoral nomads who eke out a living in the Sahara Desert.

Scarce in New Zealand, the VW Touareg started life in 2002 as a joint venture, branded alongside the Audi Q7 and the Porsche Cayenne, before an upgrade in 2011.

Depending on your vantage point you get the impression of a big SUV; viewed from the rear it appears extremely wide.

Jump in and close the door; a reassuring ‘thump’ suggests it’s nicely put together; of course – it’s made in Germany. But that’s not quite correct, because it’s built alongside the Audi and the Porsche at VW’s plant in Bratislava, Slovakia; they obviously do it right.

Interestingly, even when pushed hard in ‘sport’ mode the engine noise was always restrained, no doubt helped by that ‘German’ fit and finish and serious sound deadening between the engine compartment and the passenger area.

On-road progress was equally smooth, the 8-speed transmission slipping through the box like a knife through butter; it was best left to sort out what ratio it wanted to be in, but drivers who like to fiddle would find that the pair of flappy paddle shifters under the wheel work just fine.

On a Coromandel drive on the infamous Thames-Hikuwai road (lots of bends), ‘sport’ mode and a slow in-fast out approach brought a grin to this tester’s face; the car pulled away strongly while maintaining lots of poise, irrespective of changing cambers or surfaces mid-bend.

In the cabin, the five seat layout works well, giving plenty of space for all occupants, with none of the trap of trying to jam seven seats into a space designed for five. This is probably the reason the rear load area is a healthy 580L with space for a crew of five on a weekend away. The seats are firm yet comfortable and provide plenty of lateral support when hustling through bends, and -- a big plus for this reviewer -- the seat squabs are extendable, giving great support to a tall driver’s rear thigh.

Suspension is largely conventional: double wishbones and coils front and rear, working with gas dampers which provide active suspension adjustment and combine with roll bars to keep things on a level plane. 4Motion all-wheel drive ensures power is pushed to all corners and senses the need for more or less action depending, for instance, on whether you’re in mud or on loose gravel.

Also in the package was a full colour, 8-inch infotainment system – requiring Germanic logic for best use – and a first-rate camera set-up offering 360 degree visibility and bang-up-to-date parking sensors.

This SUV is right up with the best and warrants a much closer look; but hear one word of warning: a neighbour had visitors from Australia who drove from Auckland in a hired Touareg with their kids, just when the test vehicle was on our drive. After their first day in Waikato the little darlings did a runner with the keyless entry fob which is very effective; for the next four days entry was denied even the finest locksmiths; the car proved impenetrable. Moral: don’t lose the key.

Living up to its big reputation

At a recent vehicle launch I mentioned to a fellow journalist that I was getting the Volkswagen Passat Alltrack to test and he replied "you'll enjoy it".

The VW Amarok has always had a following of ute buyers wanting something different from the norm.