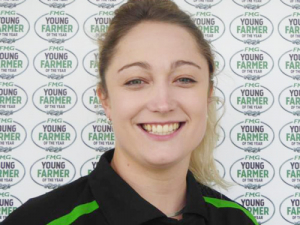 Megan Hands (pictured) was one of 14 women and nine men to compete in the annual FMG Young Farmer of the Year contest.

In the first event of the 2017 round, at Ellesmere in early October, farm environment consultant Megan Hands (26) took third place in the Christchurch district contest and skills day on Saturday; she will contest the Tasman regional final on the West Coast next March.

Hands was one of 14 women and nine men to compete in the Christchurch event, the second time women have outnumbered men in the district. The top three will contest the Tasman regional final and another five will go through from district events in North Canterbury, West Coast and Nelson/Marlborough until early December.

Similar events will be held in the next few weeks in 20 districts and seven regions nationwide.

Originally from Waikato, farm consultant Ferguson did not grow up on a farm but says he loved being connected to the land; he worked his way up to herd manager on a Landcorp dairy farm before studying agri-science at Massey University.

Hornblow, a dairy farm manager at Te Pirita, is chairman of Dunsandel Young Farmers and competed in the Tasman regional final in 2014.

It is a busy time for Hands, who works as a farm consultant for the Irrigo Centre in Ashburton, a joint venture by several mid-Canterbury irrigation schemes to provide technical support for local farmers. And she is campaigning for election to the Malvern Community Board, a west-side ward of the Selwyn District Council.

Hands says she will work hard to get into the grand final in Manawatu in July. She has already started listing things she must work on, including physical fitness, and is swotting up on farming knowledge to handle the quizzing.

“The regional final is a big step up from the district final, I’m well aware. There are a few practical things… onfarm work, I need to work on, so I’ll be tapping the shoulders of a few people and saying ‘hey, can I come out to your farm and give it a go’.”

Hands says contestants were not given scores for the individual modules but she believes the more technical modules were her strength at the district event on Saturday. These included firearms -- air-rifle target shooting and a gun safety -- AI, crutching, ram judging, foot trimming, driving a digger, erecting electric fencing, and interviewing.

In 49 years only three women have contested the grand final: Denise Brown, seventh in 1981; Louise Collingwood, second and third in 2003 and 2001; and Katherine Tucker, seventh in 2012.