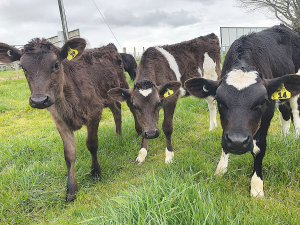 The discovery of bovine tuberculosis in the Hawke’s Bay meant St. Peters School’s Owl Farm had to rethink this season’s heifer management strategy.

With their regular grazier losing access to land for around 1000 head, the 90 calves from Owl Farm needed an alternative, which eventually appeared much nearer home.

Making sure the milking herd was not impacted and not wishing to reduce herd numbers or feed allocation, the operation set about investigating how they could provide the extra 3 kgDM/ha/day the calves would add to the farm’s daily demand over the summer months.

“Aside from the extra feed demand, we also had to factor in the extra demands on labour and infrastructure, and in summer the calves will need feed that contains more energy and protein than our pasture can provide,” says Jo Sheridan, Owl Farm demonstration manager.

“In our opinion, the benefits of having them at home outweighed any drawbacks,” says Tom Buckley, Owl Farm manager.

“We have a support block adjoining the milking platform that is further away from the shed, meaning we find we don’t get good pasture utilisation when the cows graze there, so it will suit the heifers better.”

Initially intended for silage, the farm has bought silage to free up the land, allowing the heifers to graze the new grass in autumn. The location also allows Buckley to keep a closer eye on the youngsters: weighing them regularly and checking they are on track to meet targets, carrying out vet checks and intervening with feed if the summer turns dry.

“It is also a great chance to involve St Peter’s School students in a new learning opportunity too,” adds Sheridan. “Some of the students adopted a calf in spring, now they will be able to follow them through the whole season, and be involved in regular activities, like weighing.”

On the feeding front, the alternatives included buying in feed – silage and PKE, and/or planting a specialist crop that would fill the summer gap, such as chicory or a brassica crop. Choosing to plant chicory on an area of about 4ha, the heifers can be rotationally grazed and supplemented with 20 to 30% silage. This will help create a complete diet for growing the young animals, with chicory offering a high protein feed of 11.5-13 MJME/kgDM and CP of 20-26%DM.

Additional benefits also mean that as the heifers won’t be grazing pasture in the summer, their exposure to facial eczema is greatly reduced. On the negative front, being a more intensive system, there will be break fencing, additional feed costs and the need to supply adequate fresh water and silage every day.

Although the switch to on-farm grazing will allow the farm to cope with the changes thrust upon them this season, the long term intention is to continue grazing the heifers off farm, but the exercise in successful home grazing will help broaden future options in a changing season.

It’s been a tough summer for most dairy farms including Owl Farm, the St Peter’s School demonstration farm near Cambridge.