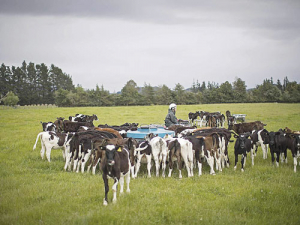 Calves can get M. bovis by drinking contaminated milk.

Follow these tips and advice to reduce the risk of your calves contracting Mycoplasma bovis this season.

M. bovis can lead to serious conditions in cattle and causes animal welfare and productivity issues.

Calves can contract M. bovis through direct contact with infected cattle or by consuming milk from infected cows.

Farmers buying or selling calves or milk can take simple steps to reduce the risk of spreading M. bovis and other diseases.

Stock movements are the highest risk for spreading M. bovis.

DairyNZ’s advice is to buy from as few sources as possible; deal directly with the source farm or via an agent.

Don’t hesitate to ask questions about any M. bovis test results available for the farm, or whether the farm has been subject to M. bovis tracing by MPI.

Ask about the stock trading practices of the farm and whether all stock movement records are up to date and recorded in NAIT. Ask about cow and calf health on the farm for the past two seasons.

Avoid buying from sale yards because of the cattle mixing that occurs there; buy only calves with NAIT tags and promptly record all movements.

Ask your trucker to avoid mixing calves with other cattle in holding yards or on the truck; keep purchased calves isolated from the main group for seven days and monitor them for signs of disease.

Find a buyer now for your future weaned calves, if possible, and tell buyers about efforts to reduce the risk of M. bovis exposure.

- Do not feed milk from cows under treatment for mastitis or other illnesses; this milk should be discarded. These cows are more likely to shed M. bovis into their milk than healthy cows.

- Acidification with citric acid to pH below 5 for at least eight hours will kill M. bovis, but below pH4 the milk will be unpalatable and the calves will refuse to drink it. Our recommended target is pH4.5.

- Addition of yoghurt to milk is a less reliable way to reduce pH, as this process takes more time and is temperature dependent to get the culture growing. If the pH doesn’t drop below 5 for at least eight hours, M. bovis will not be killed.

- M. bovis is not killed by the addition of potassium sorbate preservative.

Whenever calves leave the farm on a truck, working with your trucker to make their job as easy as possible will help to ensure your calves are treated with care.

The position of your bobby calf pick-up point and slink collection point can improve onfarm biosecurity and reduce the risk of exposure to pests, weeds and disease.

Bobby calf rearing facilities are in the orange zone. If you have to load out of the bobby shed then ensure as little cross over as possible between the truck and drivers and the inside of your bobby calf sheds. Ensure all slinks are covered and out of public view.

Orange: Areas that are accepted to have a mix of cows, farm staff, visitors and equipment, e.g. the milking shed.