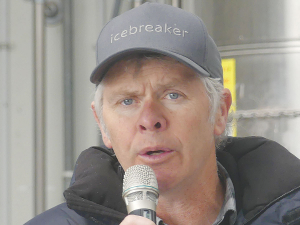 For the first time, LUDF has adopted variable milking from the start of the season, with a regime of 10 milikings in seven days. Cows are milked at 5.00am and 2.30pm Mondays, Wednesdays and Fridays but only once every other day - mostly 8.30am but 11.30am on Saturdays.

Savage, a consultant with Macfarlane Rural Business, Ashburton, is the acting head of the South Island Dairy Development Centre (SIDDC) which oversees the farm's operation.

He said the regime was adopted largely on the basis of research by DairyNZ.

"We set out assumptions strongly based on research," said Savage.

Variable milking should break even financially, small losses in production being offset by various gains including energy and labour costs.

But it also gives better outcomes for the welfare of both staff and cows.

"It's early days but we're tracking pretty close to what the research suggests we should do," said Savage.

"And what's not included in our assumptions to date is some of the gains that we've been getting around reproductive performance and getting cows back in calf."

Because of Covid restrictions, the farm's quarterly update went on the road, split between three smaller venues over three days, rather than one large event at LUDF itself.

Various combinations of twice a day, 3-in-2, and once a day are now more common, with only 37% of farms now using twice a day exclusively throughout the season.

That figure would have been more like 50% just three seasons ago, he said.

Edwards presented results of trials which concluded that cows will drop 5% in production from the time variable milking is introduced, whether it's the start of lactation or later dates. That relationship was linear.

However, the drop came mostly in the form of protein production, which meant a corresponding improvement in cow condition score - upto 0.25 condition score (CS) better by the end of the season if variable milking was used throughout.

One question was whether it was the number of milkings over a week or the intervals between milkings that had the greatest impact on production, but research last season showed no significant difference between different timings, which meant farmers could have some flexibility in scheduling milkings to suit staff rosters.

However, Edwards said they do "have to be careful" with that result as the effects may have been too small to detect on that small sample size. Other research suggested slight decreases in production with longer milking intervals.

But if the main driver is about people, the payoff is in staff time, he said.

"Even if you don't want to go to a 3-in-2, 10-in-7, once-a-day type system, even within twice-a-day, there are options there about making those milking intervals more attractive, for example using an 8 and 16 hour interval compared to our traditional 10 and 14."

There was no difference in sleep times prior to calving but once milking was fully underway, those working on variable milking systems recorded an average of 27 minutes a night better sleep.

Projected gains include winter feed requirements dropping by $1.80 per cow per week because of the expected improvement in condition at the end of milking, which should also improve or negate the impact on CS of the following mating.

A decrease in lameness, largely due to cows walking less to and from the shed, is projected to save $4.80 per cow in animal health spending.

A whole herd performing as well as its few very best cows do currently, is what breeding will deliver in the next 10 years, says veteran breeding advisor Jack Hooper.

As an LIC advisor, Hooper has guided LUDF's breeding strategy since 2002. Now officially retired but working as a contract consultant to LIC, Hooper told the LUDF Spring Focus Day that LUDF's breeding aim was efficiency of milk solid production.

He presented a chart of steady gains since 2005, coupled with a marked drop in liveweight.

"Since 2005 the breeding values for that herd have increased by almost 36khMS - 18kg of protein and 18kg of fat. At the same time, that line going downward is liveweight. So the cows at Lincoln are now 20kg lighter than the cows were at Lincoln back in 2002."

"What I love about hybrid vigour is you're getting nearly 5% increased production for 2% increase in liveweight."

But it was also important to get the right age structure and management system.

"Engine room production is 4-to-8 year olds. So if you're going to drive production on a farm you've got to get as many cows in to that 4-to-8 year age group as possible.

"Too many two year olds, too many three year olds lost through wastage means an unrealised opportunity."

Research also suggested an ideal liveweight limit of 500kg, because of a diminishing relationship between liveweight and dry matter intake.

Under reduced milking interval systems, traits such as front teat placement, udder conformation and speed of milking, all with heritabilities of 20-25%, increased in importance.

Hooper said that milk solid production had increased by almost 50 kg/cow over 10 years, an estimated 40% of those gains a direct result of genetic improvement.

However, the way genetics are tracking in New Zealand at the moment, that rate of improvement could double over the next 10 years, said Hooper.

The Lincoln University Demonstration Dairy Farm (LUDF) is looking to cut staff numbers as it adopts a new “lean” system in an effort to cut costs and maintain its place as a leader of the industry.

Failure to meet its own goals for reproductive performance (industry targets) has been much talked about at Lincoln University Dairy Farm (LUDF).

The Lincoln University Dairy Farm (LUDF) is showing the way to make a profit even with the depressed world prices for milk solids.