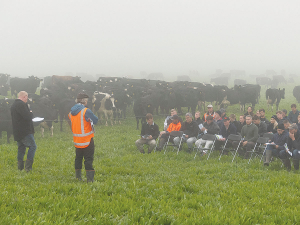 Under the new regime, the farm milked twice a day, three days a week but only once a day for the rest.

Variable milking is expected to break-even financially, small losses in production being offset by various gains including energy and labour costs.

But it also expected to bring significant gains in staff and herd welfare.

At the spring update in October, Savage had said the regime was going surprisingly well and he believed it was also helping with reproductive performance and getting cows back in calf.

However, the season's in-calf rate was on target at three weeks, but fell away to about 68% at six weeks.

"We were hoping this 10-in-7 was going to help us out and get us a bit higher than that and improve our in-calf rate" said farm manager Peter Hancox.

Savage said it was about the 15th or 18th year running that the farm has recorded a high empty rate and they were "scratching our heads" to work out the cause.

"It's consistently about the sixth of November that our cows stop getting in calf and our empty rate starts going off on a tangent."

Benchmarking against the Rakaia farm of Liam Kelly, a member of the LUDF management advisory group, showed the farms were very similar in most respects but Kelly achieved empty rates of only 10%.

They were now reaching out to South Island Dairy Development Centre (SIDDC) partners for support and funding for an intensive testing programme comparing the two farms "just to try and drill into what's going on for that week four to six mating," he said.

They hoped to test such factors as nutritional parameters of the pastures, neospora levels in the herds, and blood ketones to assess the cows' energy balance.

"This isn't just unique to LUDF and that's why we're keen to do it.

"The empty rate for Canterbury last year was the same as New Zealand-wide, which was 16.3% and that's the average."

Savage, a consultant with Macfarlane Rural Business, Ashburton, said that about 20 to 25 of their client dairy farms had gone to a variable milking regime and they were evenly split between those who've "nailed it" and those who've struggled.

Many started the season on twice a day then changed over to 10 in 7. On some farms it was pretty obvious when they made the change because of a 5% to 10% drop in production, but on others he couldn't spot it just from the production figures.

Savage said the key was keeping the feeding regime and feed management the same.

"Where it goes wrong is when people try to work out and allocate feed based on nine or eighteen hours or 11 hours, or 12 hours or five hours, and they try and work out how much grass that cow's going to need for the break.

"The problem is that your feeding regime and profile changes during the day based on the time of the day, so if you're trying to do that, the odds are you're going to muck it up."

Hancox said LUDF would definitely continue with 10 in 7 next season and try to sort out the problems.

"I'm pretty guted this season, to be honest. I thought we're going to get some benefits with the 10 in 7 around cow condition, lameness and in-calf rate, but we haven't ticked any of those boxes really at this stage.

"The people side of it has definitely been ticked, but the others haven't."

Savage added that the farm had been "checking a lot of those boxes" around low cell count, low lameness, and cow condition but "the wheels fell off" around mid-November.

Meanwhile, another setback for LUDF is the return of Johnes, which Hancox blamed on having to bring young cows into the herd, to make up a high empty rate when using only AI at the height of the M. bovis epidemic.

The farm now has a number of Johnes-positive cows, but this season's empty rate means they can't afford to cull them all.

A couple were "definitely light" and won't make it to next season but the farm will hang onto most of them, said Hancox.

"We will obviouslt identify them at calving. They'll be separated and we'll just make sure we don't feed their milk anywhere close to the heifer calves."

Genetics can help dairy farmers take steps this season to reduce their emissions while they wait for further new tools and technologies to be developed, says CRV managing director James Smallwood.