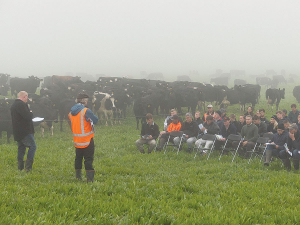 Of the three, the Allflex collars and cow manager tags aim to monitor animals’ behaviour and vital signs for early warning of problems or changes such as heat onset. Halter’s collars go a step further, using audio, haptic and electric cues to control the cows’ behaviour and movements.

She said the Allflex collars were like Fitbits for cows, with multiple accelerometers which every minute of the day monitor force, movement, and position. They can tell the difference between a range of behaviors such as eating, ruminating, and heavy breathing.

“It can, if we want it to, send us alerts to say that our cows are running down the road towards Springston, and we should go get them back.”

For heat detection, she explained that every animal had her own baseline but a drop in rumination and peak in activity would show when she was ready to be bred.

“Typically the biggest improvement that we have in the first year is in threeweek in-calf rates.”

Jared Bekhuis, general manager of Senztag, the company which markets the cow manager system, said the founder started with collars 35 years ago but changed to an ear-tag sensor model in order to directly measure the animal’s ear temperature.

The tags have dual sensors which monitor blood flow through the ear.

Bekhuis said the tags detect various behaviors - eating, detected by specific movements of the head and jaw; ruminating, which in cows, sheep and deer is accompanied by a particular type of fluttering of the ear; and activity, whether inactive, normal, or highly active, which could denote bulling.

The data is presented to the farmer in modules including fertility, health, nutrition and a KPI indicator.

“We’ve seen an increase of six-week incalf can carry by about 8% and decrease in empty rate of 5% on average.”

Bekhuis said rumination is the big indicator of cow health but Cow Manager adds the ability to correlate rumination changes against ear temperature, comparing it not just with the herd’s average temperature but also against the cow’s own historic data.

With the nutrition module, Bekhuis said the system can monitor whole herd behaviour so that when, say, 10% show a reduction in eating, it correctly identifies that feed has run out, rather than throwing up a lot of individual health alerts.

For Halter, the big selling point is the time saved by managing break-feeding with virtual fences, with cows’ movements being controlled by solar-powered collars though sound and vibration, and electric shock as a last resort.

Business development executive Theo Beaumont said unlimited solar power was “the secret to everything” because instead of taking “little sips” of data Halter provides about three million data points per day per cow, and it allows GPS to run 24/7.

It also allows the product to be as updateable as a smartphone, he said.

“If we add an algorithm to our heat model, for example, instead of waiting two years, three years for us to build another piece of hardware and you have to buy it all over again, we hit a button in our Auckland office and all of the collars out the field will just remotely update.”

Halter provided leased hardware, with the software being consistently upgraded with new features, he said.

Beaumont said the collars work essentially by weaning cows off the cues they usually get on farm – such as a worker arriving on a quad bike to say it’s time to move – and introduces them instead to the cues the collar gives them.

It takes only about two to five days for them to learn, he said.