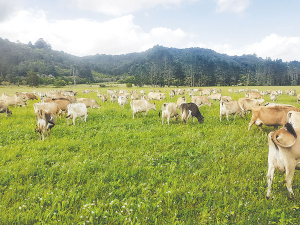 The poor pasture performance of traditional ryegrass/white clover mixes has many Northland farmers searching for substitutes.

The poor pasture performance of traditional ryegrass/white clover mixes has many Northland farmers searching for substitutes and Evan Smeath, who farms in Hukerenui, is willing to try alternative solutions.

The Smeaths' diverse pastures include a variety of species: tall fescue, cocksfoot, chicory, and more recently, lucerne. Their willingness to try different approaches was one reason why Smaller Milk and Supply Herds (SMASH) had planned to run a field day on their farm this week. Due to Covid restrictions, the event has been postponed.

The farm, which Evan and Sherleen own, and where his son and daughter-in-law, Clinton and Pam, contract milk, is made up of a 95ha dairy platform, half of which is susceptible to flooding, and a 72ha grazing platform, on hillier country, where they graze their young stock.

"We are at the top end of the Hikurangi Swamp Drainage Scheme and we can flood frequently," says Evan Smeath.

"It can take from a day to 14 days to drain away, depending on the weather event. Half the milking platform can be affected in a bad flood."

Smeath is not new to using alternative pasture species. "We have to think outside the square as ryegrass isn't cutting the mustar here in Northland, especially with the dry we've had over the last three or four years. By February, or even before that, the ryegrass is shot, it is too hot.

"I've been using cocksfoot for about ten years and looked into it because I was researching alternatives that would keep going. It can utilise water twice as well as ryegrass, and the new cocksfoots are more upright and not as clumpy.

"I've also been growing tall fescue for at least ten years. Those paddocks are still there now; ryegrass wouldn't do that.

"On the top side of the farm that doesn't flood, I am putting in cocksfoot, fescues, chicory, and lucerne, and on the flood blocks, chicory, a bit of ryegrass, cocksfoot, and clovers. I don't spend too much on ryegrass seed - a good one at a reasonable price - because the chances of getting a flood are pretty high, and looking at biennials because they grow so much better.

"There is no point in putting an expensive ryegrass in. I have put grass in, it is looking lush, and six weeks later it is gone again. I have started treating all of the flood block like a winter crop/summer crop. I direct drill some annuals and biennials in the winter time, and a bit of clover and cocksfoot. It does cost me, but I get a lot of growth out of it."

The Smeaths are also reliant on crops to meet their herd's feed requirements.

"Maize is great value for money, and generally with our good fertile country we can do pretty well, with yields of about 23-25t/ha, occasionally we gat a drought where we get a big less, 19-20t/ha. If we get a flood, maize is the cows' staple diet, with a bit of balancing up. It can be six weeks between the water being gone and grazing it if there is a big flood. From seed to feed is six weeks, so you've got a seven week period when you have to fill in with some extra supplement - maize is brilliant for that. It bulks the cows up and they keep the condition on."

The Smeaths also grow a couple of less traditional crops for the north - fodder beet and lucerne.

"I have grown a bit of fodder beet over the last four or five years. It can be tricky to grow, but with careful management it is an extremely good crop. The other crop we are starting to look at, now that Northland is getting warmer and drier, is lucerne. It seems to be doing extremely well. This is the first year I've had it in a pure sward, but I've had it in my pasture swards for three years now."

Smeath is keen to encourage people to make the effort to attend events.

"You've got to get off farm and look outside the square. I have learned a lot, and I am still learning. Everything is changing and you have got to keep up with it.

"When you go to SMASH events they have two or three speakers covering different topics, and they are generally people that have been out there, done that, and are doing well at it. That is why I like going to their meetings, everyone is there to learn, listen, and ask the right questions."

To find out the new date for the field day, please visit the SMASH website www.smallerherds.co.nz.

Michael Kiernan's lucerne crop was a godsend in the dry Southland summer this season.

Social media has proven to be a great tool for Waikato farmer Andrew Macky.

A midlife crisis and the desire for a new challenge were the catalysts for Nathan and Rosie Hughes’ switch to smaller herd dairy farming three years ago.