Bulls with the X factor 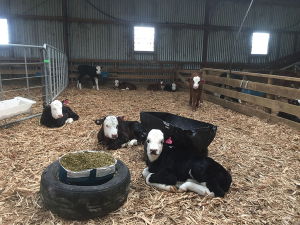 Why pay more for a registered Hereford sire?

The NZ Hereford Association says that by buying a registered bull and referring to the estimated breeding values (EBVs), and by talking to the vendor, a farmer may have some assurance of good calving ease and lower birthweights.

“They have spent years performance recording their herd to genetically select for specific traits.”

“The March 2019 Dairy Beef Progeny Test Interim Sire Report, says most sires’ EBVs (across the traits) lined up well and predicted the performance of their calves. On average they did a good job of improving actual performance - the calving ease traits more so than the early growth traits.”

“Higher, more positive, calving ease EBVs are more favourable. For example, a bull with an EBV of +5.0% would be expected, on average, to produce 3% more unassisted calvings from 2-year-old heifers than a bull with an EBV of –1.0% (6% difference between the sires, then halved as the bull only contributes half the genetics).

“Gestation length EBVs are estimates of genetic differences between animals, displayed in days. A lower, more negative GL is a shorter gestation. It is recorded by some breeders, but it is not as well recorded as it is in the dairy industry, due to the trait only being calculated from either AI or hand mating.”