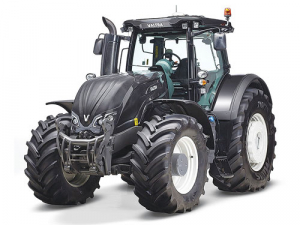 Hot on the heels of its A and N series, Finnish tractor manufacturer Valtra has topped out its fourth-generation S series with the flagship S394 model.

Fitted with the AGCO Power 8.4L AWF engine, the tractor delivers a maximum output of 405hp and 1600Nm torque, and mirrors the already released numbers of its sister company’s MF 8740.

Emissions are taken care of by an SCR (diesel exhaust fluid) only solution, which removes the need for diesel particulate filters (DPF) or diesel oxidisation catalysts (DOC).

Transmission is the company’s stepless variable speed set-up in the shape of the AVT version which offers the operator the choice of pedal or joystick control for best efficiency and reduced fuel consumption, while for those who like it simple a further mode mimics manual gear shifting.

At the rear end of the tractor lift capacity is quoted at 12 tonnes, complemented by 5 tonnes up front. Hydraulic flow is via a variable displacement pump with 205L/minute capacity which can support up to nine remote valves.

The pneumatically suspended cab has had a major re-work of its control functions, seen in the new Valtra SmartTouch armrest to the operator’s right; this has the drive lever control direction and several programmable buttons for controlling linkage, remotes, PTO and diff lock functions.

The drive lever is installed in a natural position and the smooth rubber-like covering offers feel for precise control, and grip when working in undulating terrain. The integrated touch screen terminal allows easy customisation of all controls, and access to advanced functions such as U-Pilot and AutoGuide management systems.

The system also allows owners or operators to set up multiple user or implement profiles which can be recalled on demand, with full ISOBUS compatibility between tractor and suitably equipped implements without the need for additional screens or control boxes.

Valtra has won a major international design award for its tractor SmartTouch armrest and interface between operator and machine.