He rakes, bales and wraps in one 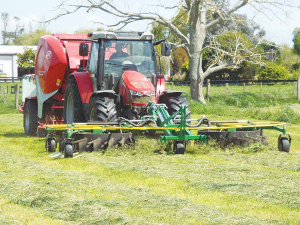 Hay and silage contrator Joe Macfarlane has new additions to his arsenal this season.

The retired dairy farmer runs a contracting business east of Hamilton servicing dairy farmers and the increasing number of lifestyle blocks over a 20km radius.

He specialises in silage and hay in round and conventional packages with a focus on high quality. This is reflected by his own property where he takes up to five cuts each season, producing leafy, high value bales.

For the 2019-20 season a pair of new arrivals will make raking, baling and wrapping a one-man task.

Said Macfarlane: “Over the last few seasons I’ve been working closer to home because using conventional set-ups I was spending so much time on the road heading back and forth to swap from mowers to rakes to balers.”

Using his Massey Ferguson MF 5612 Dyna-6 tractor as the prime mover he rakes with a front mounted Agronic WR 600 twin rotor rake and bales and wraps with a Welger RPC 245 Tornado combo at the rear.

The tractor’s engine has had a little tweaking and now puts out 94kW (125hp) so has plenty of power to run the combo, he says.

Of interest is the front mounted rake, already familiar to Macfarlane who had personally imported a smaller model a few years ago. This machine is carried on the tractor’s front linkage, with a chain connection to the top link position allowing good ground adaptation. Height control is by a robust castor wheel assembly in each corner, easily adjusted with spacer washers.

Designed to produce a swath to suit the following machine, the rotor spacing is adjusted hydraulically.

It was set up during our visit to easily clear two 3.2m cut and conditioned swathes.

“There’s a lot going on [in the combination], but with the tractor’s sloping hood, a very good touch screen control box for the baler/wrapper and four cameras overseeing the operation it’s getting easier to use,” he said.

“The only thing I’m looking at getting hold of is a kit to use the rake on the front loader, which will make things easier in some of the tighter lifestyle properties.”

The Massey Ferguson MF 6700 S Stage V series has won the Agritechnica Machine of the Year Award in the mid-power tractor category.

Many dairy farmers may once have favoured a ROPS tractor for its easy access and dismounting to open gates or take down hot wires.