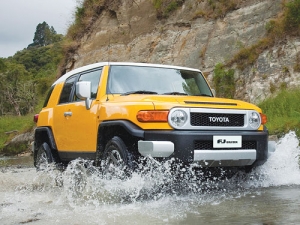 Love it or hate it, the Toyota FJ Cruiser is different: it's been called weird, wacky, funky and retro and hasn't ever been a shrinking violet.

Toyota New Zealand says the FJ Cruiser, an SUV model that's been in its New Zealand line-up since 2010, will end production in August.

The retro-styled FJ Cruiser was launched in homage to the pioneering FJ40 that lay the foundations for the now world-renowned Land Cruiser.

"The FJ Cruiser was a special model introduced as a testament to the original FJ40 and to ride on its legendary namesake," says Spencer Morris, Toyota New Zealand's general manager of product.

A memorable FJ Cruiser moment was the 16-day Top to Bottom challenge that saw Kiwis follow television presenter and Toyota ambassador Marc Ellis on an epic off-road journey from Cape Reinga to Bluff meeting locals and national legends along the way. This helped celebrate the 60th anniversary of the Land Cruiser and its high regard in NZ.

A total 299 units have been sold to date with firm dealer orders available until production ends.