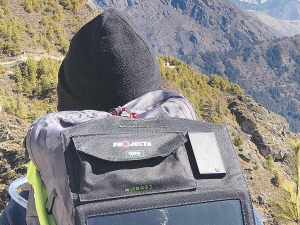 Projecta has released a new range of solar chargers.

Given the absence of power outlets in many remote buildings on New Zealand farms, there’s every chance of ending up with a flat battery when away from civilisation for an extended period.

The company says a Projecta PP15 solar charger would make a great back-up for those planning any time in the backblocks, with high country mustering being a case in point.

Drawing power from its folding monocrystalline solar cells, the 15W charger features a built-in power bank, which can store power from the sun and continue charging devices when night falls.

USB-powered devices can be charged directly and simultaneously from the three available USB ports, with a total combined output of up to 2.4A (5V).

The solar charger kit comes with corded loops and carabiners for versatile mounting to sheds and backpacks for ideal sun exposure, folding up neatly into an ultra-portable carry case when not in use.

The PP15 is complemented by the PP10, a 10W model that directly charges portable devices without a power bank, both part of Projecta’s recently released COMPAC range of personal power devices, aimed at those wanting  off-the-grid power for their portable devices, or a peace of mind power solution for emergencies.

Also available, are a pair of power banks, PB5 and PB10, which offer USB-C fast charging and one of the smallest footprints relative to their large capacity (5,000mAh and 10,000mAh respectively).

The lightweight and compact power banks are capable of charging 18W laptops, such as the MacBook Pro, plus a wide range of USB-powered devices.

Listening to customers across all sectors of agriculture helps the Handypiece team design and engineer options to make its unit better suited for each application.