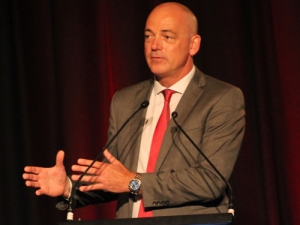 Theo Spierings at the China Business Summit in Auckland.

He says even he is too old for the kind of thinking needed: it requires 20-25-year-olds. Three hubs have already been set up in Asia, and he plans another in Auckland via their graduate programme.

"You see the entrepreneurial mindsets kicking in big time," Spierings told Rural News. "You need to disrupt your own system... If you want to develop a good commerce strategy you need to think differently.

"I'm too old; you need young people like my kids, they don't watch TV, they watch YouTube. They are constantly connected in social media. So it is a completely different world. We have no clue what it means.

"We need these people with brains to develop the business models for the future. If we don't get these people in, these youngsters with brains from a high level, we cannot follow China because the transformation is going so fast."

Spierings says China does not have a vested interest – as does US or Europe – in massive infrastructure or distributors and retailers. So China can shift from the traditional sales channels to the new sales channels much faster than anybody else.

"They can shift the game from here to there and it is scary because it is a 1.4 billion people shift."

Fonterra's hubs of young people have already been set up in Malaysia, China and Indonesia, reporting to the managing director, Spierings says. He wants another in digital and e-commerce in Auckland via the graduate programme.

"We push them to come up with the best possible business models and the best get rewarded. We tell them you get NZ$5m to invest in the business model and come back in a year and show that it works. These are peanut investments but you can get huge results."

Earlier he told a China Business Summit in Auckland these groups of 20-25-year-olds are like Dragon's Den – a television programme where people with a business idea pitch to potential investors.

He said in his previous company in 2008 they used the same approach for a baby food brand. The successful model got 10m euros to invest; now it is a 1b euro business with a 200m euro profit.

China's demographics are changing: they have a 1-2 child policy and 400-500m middle class people with good income but technology and e-commerce may be the biggest disruption.

"If we're not as fast as China and China's consumers we will lose market share."