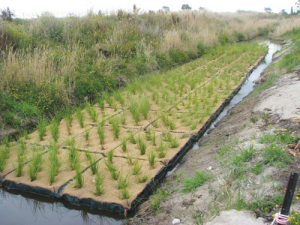 Farms are expected to benefit from experimental work by the Department of Conservation and Fonterra as they jointly trial floating wetlands in Waikato.

Developed by Massey University, the wetlands consist of native wetland plants in buoyant ‘rafts’ that sit on the water surface. These are capable of removing large amounts of nutrients: the rafts filter water in drains and runoff before it enters waterways.

This ‘Living Water’ project has located floating wetlands in drains around Lake Areare (near Ngaruawahia) to monitor the technology. The drains are “nutrient enriched”, the trial partners say.

“The wetlands have only been installed for a short time, but initial tests and rapid plant growth show they’re doing a good job of removing nutrients from the water.

“The floating wetlands are not a ‘silver bullet’ for raising water quality but, used with silt traps and riparian planting, they are practical and effective.”

“Floating wetlands don’t just remove nutrients from waterways, they also attract birds and insects and the grasses can be harvested as a feed supplement.”

The trial will run until mid 2017 and if the good results continue the floating wetlands could be in waterways nationwide.