Watch out for golden straws 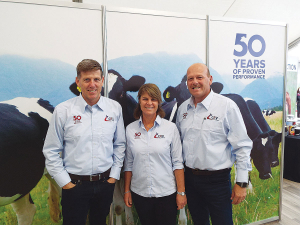 CRV Ambreed in August and September will slip the straws into its stocks of AB products, says marketing manager Katrina Evans.

This Golden Straw promotion is part of the company’s 50th anniversary of business in New Zealand.

The company lays claims to several first during its 50 years here: cross-bred genetics in the 1990s, facial eczema tolerant sires with AgResearch in 2014 and in 2017, and LowN Sires to enable a reduction of nitrate leaching caused by the concentration of N in  cattle urine.

It launched sexed semen in NZ 10 years ago and has since followed the technology, said to help improve animal welfare.

At the recent National Fieldays, the chief executive of CRV Global, Roald van Noortfrom, visiting from the Netherlands, gave Dairy News insights into where the company is heading.

On the 2018 acquisition of the start-up semen sorting company Engender, at Auckland University, van Noort said “it’s great to invest in NZ, with a company that has a NZ presence, and in doing so commit to develop even better technologies in the field of semen sorting”.

He said that data will play a crucial part in R&D, looking at feed intake in real time, the measurement of nutrient content of excreta and understanding more about methane production. Data analysis will lead to choosing sires with desirable genomes, good for sustainability and the environment.

CRV Ambreed managing director Angus Haslett said the company spends at least 20% of revenue on R&D to keep up in genetic technology. This will contribute to the LowN programme underway with DairyNZ, AgResearch and Fonterra, and may lead to the creation of industry breeding values for nitrogen excretion.

Said Haslett, “CRV has for years invested in helping farmers create herds that are productive and environmentally sustainable, for example its health and efficiency indexes”.

“CRV is confident some of the extended global research will directly benefit the NZ dairy industry.”

The resulting drive to sustainability will require a lot of spending.

“Farmers in the Netherlands are rewarded for sustainable practices that have minimal impact on the environment. Farmers who focus on such matters receive increased payouts via their milk company who in return gain higher prices from their retailers.

“These retailers can sell at an increased price to consumers who are happy to pay a premium for such actions knowing they in turn are helping the environment.”

It’s encouraging to see signs of this developing in NZ and CRV wants a part in this, Haslett said.

Herd genetics not only about money

Selecting the right genetics is no longer only for improving the economic output of a herd, says CRV Ambreed sales and marketing manager Jon Lee.