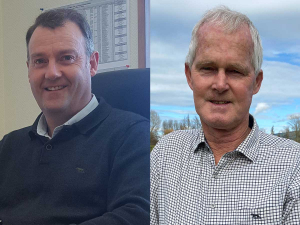 The result was announced at DairyNZ’s annual meeting in Ashburton last night.

With his Sue, van der Poel has farming interests in Waikato, Southland, Canterbury and in the US.

He has served on the boards of Fonterra, Fonterra Shareholders Fund and New Zealand Cooperative Dairies. He has also received numerous industry awards including Sharemilker of the Year, Dairy Exporter Primary Performer Award and a Nuffield Scholarship.

Glass and his wife Paula, with their two teenage daughters, own a 670-cow dairy farm, and two further irrigated properties rearing and finishing bull beef at Methven, Mid-Canterbury.

Colin heads Dairy Holdings Limited which has extensive operations throughout the South Island. He is a director of several agri-business companies and is currently chairman of Ashburton Lyndhurst Irrigation Limited.

Things to consider when investing in effluent storage

Investing in effluent storage is a significant decision on-farm, so it’s worth taking the time to carefully plan what is needed to ensure the right design for your farm.