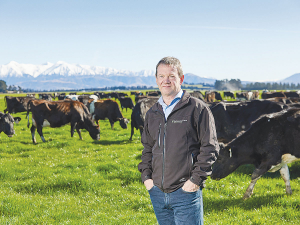 Westland chair Pete Morrison has reiterated the terms under which protesting former suppliers had surrendered their shares that they say are worth millions.

A group of former suppliers of Westland Milk Products has formally asked the Overseas Investment Office to block or delay the sale to Yili until they are paid millions of dollars owed to them for previously surrendering their shares. Read more here.

He said in a statement, “It is important to note that the individuals concerned knew of the conditions and terms of payment of their unsecured debt when they surrendered their shares.

“If the scheme is approved and the shares in Westland are transferred, Westland remains fully liable for these liabilities (as for all other liabilities) and the timing for payment and all other terms of payment for these individuals’ liabilities remain the same as before.”

The farmers making the approach to the OIO are all in Canterbury.

The group’s spokesman, Pete Williams, said that “true blue” Westland suppliers on the Coast didn’t have the same option of swapping supply.

“I suspect many of them would have, actually.”

“We’ve followed Westland pretty closely for the last few years. You know there was a lot of commercial risk for us to supply Westland. We took a lot of interest in the preceding three years before we made our decision to leave.”

Speaking before the shareholders’ vote on whether to accept the Yili offer, Williams predicted the deal would go through. Times were tough, with a lot of financial pressure, pressure from their banks and a milk price that meant they were probably losing money.