The sad demise of Westland Milk 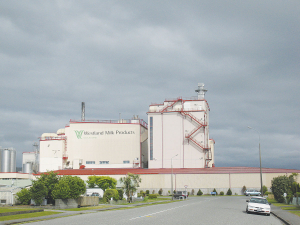 Selling Westland Milk Products to the Chinese dairy giant Yili may be the right thing but will be the sad end of the cooperative, says Barrytown farmer Richard Reynolds.

“It may be the right decision but it’s a bit of a sad moment, isn’t it? It’s like shooting your old dog that you know needs shooting. It doesn’t mean you enjoy it.”

Along with Waikato’s Tatua, Westland was one of only two co-ops which opted to stay independent in the industry restructuring that created Fonterra.

Now, members are being asked to approve a deal that would see Westland sold to Yili for $588 million, or $3.41 a share versus their current value of about $1.50.

The average Westland farmer would get about $480,000 from the deal.

“Compared to the historic performances of Westland Milk Products over the last five years, this is a good offer,” said Reynolds. “That does not mean this is an enjoyable position to be in.”

He said the figure also must be put into perspective against farmers’ annual milk cheques.

“It is less than a bad annual cheque,” he said. “Is that attractive? Let’s not say this is amazing.”

Like many Westland farmers, Reynolds planned to attend one of a series of meetings with company officials to discuss the offer, which were continuing as Dairy News went to print.

But he wanted to hear alternatives to selling. “What is plan B? Let’s have a discussion about plan B as well as Plan A.”

Reynolds, who has stood unsuccessfully for places on the co-op’s board, also called for discussion of the reasons Westland got into this sad position.

He said that although Westland was run by well-meaning people, a problem common to all co-ops was underinvestment in the company due to overpaying the shareholders. He believed there had been a failure to hold poor performance to account and the “acceptance of average” by management and governance.

Other shareholders did not want to comment before attending a meeting to hear the board’s reasoning, but spoke of the proposed price being disappointing compared with some of the numbers circulating.

One of Westland’s larger and more recent shareholders, Southern Pastures, had no immediate comment.

“We haven’t had time to analyse the offer and as such have no position on the announcement,” said Southern Pastures executive chairman Prem Maan.

Described as the largest institutional dairy fund in New Zealand, Southern Pastures had announced a big investment in Westland little more than a year ago.

Southern Pastures’ nine Canterbury farms produce 4 million kgMS/year and have supplied Westland since the start of this season.