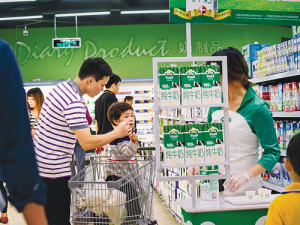 European co-op Arla Foods says its half-year revenue is up 3%.

It has also achieved a 19% lift in ‘performance price’, which measures the value Arla has generated from each kilo of milk supplied by the farmer-owners.

In its report on the half-year ending June 30, 2017, Arla says the improved results follow a much-needed recovery in the global milk prices after nearly three years of low prices.

“This was a direct result of lower-to-unchanged milk production versus the prior year in most dairy-producing markets, combined with improved demand for milk and dairy products in Europe, US and emerging markets.”

Despite reduced total milk volumes from farms and adverse currency moves, group revenue grew 3.4% to Eur 5 billion (from Eur 4.85b in first-half 2016). The underlying revenue growth, excluding currency effects and divestments, was 6.6%.

“As a result, in the last 12 months, we have increased by 42% the prepaid milk price to the farmers who own our company. They needed that, as the past two and a half years have been tough for most dairy farmers around the world.”

Strong sales growth is reported by Arla Foods Ingredients, a fully-owned subsidiary and a global leader in whey based ingredients for many food categories; it reported a 24% revenue growth in the first half of 2017 to Eur 313m versus Eur 252m in first-half 2016.

The natural whey ingredients business remains the most profitable part of the Arla Group.

Tuborgh says the co-op continues to take lead and invest in technology that sets the industry standard for quality, innovation and food safety.

“I expect this business to continue its high growth rates for the rest of the year via strong performance in value-added protein ingredients for the child nutrition and medical nutrition markets.”

Europe is Arla’s core commercial zone with revenue of Eur 3.2 billion in the first half of 2017 (excluding European revenue from Arla Foods Ingredients and trading), equal to 63% of group revenue, and was unchanged from Eur 3.2b in first-half 2016.

Higher sales prices and improved share of branded sales had a positive impact on Arla’s revenue in Europe, however these were offset by lower milk volumes and adverse currency moves, primarily in the Great Britain pound, which impacted revenue negatively by Eur 135m.

Farmers to power own plant

European dairy co-op Arla is putting innovation at the centre of its growth plans for the next decade.