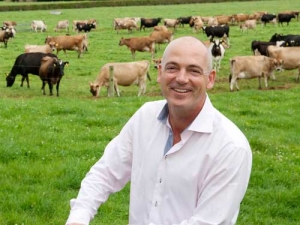 Fonterra chief executive, Theo Spierings, says improved second half results in the 2015 financial year were driven by a strong focus on cash and costs.

"We focused on improving our sales mix, achieving more efficiencies; maximising our gross margins and achieving our strategic goals faster.

"Our efforts contributed to a second half rebound in our performance and profitability."

The co-op this morning announced a net profit after tax of $506 million for the financial year ended July 31 2015 - up 183% - after a stronger second half performance in difficult market conditions.

"With the reorganisation of Dairy Partners Americas completed, consumer and foodservice volumes were up a significant 27% to 1.7 million MT," says Spierings.

"Our Asia and Greater China consumer and foodservices businesses, which source most of their milk from New Zealand, were also important contributors to this result."

In the 2015 financial year, investments in capacity and maintenance in New Zealand included: the $167 million to complete the Pahiatua dryer and distribution centre; $132 million in the anhydrous milk fat, milk protein concentrate and reverse osmosis plants at Edendale; and the $122 million investment in the dryer at Lichfield due for commissioning in 2016. Combined they represent 8.2 million litres additional capacity.

"Our new plants stand out in terms of efficiency gains and a more flexible product mix. In the second half we optimised our product mix, favouring products where we could secure higher prices, such as cheese and casein, to capture shifts in customer demand," says Spierings.

"Our $230 million investment in the past two years on capacity to support our consumer and foodservice performance is generating the volume and value growth we want, especially in Asian markets."