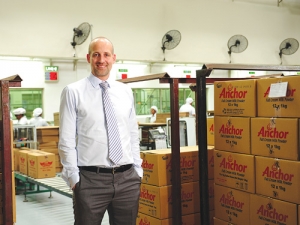 Like most New Zealanders, Sri Lankans are growing up drinking Anchor milk.

However, in contrast to NZ, milk consumption in this country of 21 million people is low: average consumption is less than half a glass of milk per day.

Fonterra is already a major player in Sri Lanka, one of the co-op's four leadership markets around the world. Clement says 135,000 glasses of Fonterra milk is consumed every hour in the country.

After 35 years in this market, and employing 750 people, Fonterra enjoys top brand recognition: Anchor is one of the best known brands.

Full cream milk makes up about 55% of the total dairy consumption; Fonterra's two brands – Anchor and Ratthi -- have 60% market share.

Milk powder is imported from NZ and turned into full cream milk powder. The co-op also operates two processing plants – a packing and blending plant, and a cultured products and drinks plant.

But it hasn't been always plain sailing for Fonterra in Sri Lanka: product bans, court cases and misinformation spread among consumers have caused headaches from time to time.

Fonterra was forced to suspend its operations two years ago after facing product bans, court cases and angry demonstrators. The company was banned by a Sri Lankan court from selling or advertising its products after the country's food safety authorities said they found levels of the agricultural chemical dicyandiamide in two batches of milk powder. Fonterra vigorously disputed the finding.

A court order later removed the ban, allowing the company to continue its operations.

Clement puts this issue down to misinformation. He says it took Fonterra only six months to regain its market leadership status after the event.

The Sri Lankan Government is keen to increase domestic dairy production and reduce the country's reliance on dairy imports.

Clement says about 80% of milk powders are imported; local farmers provide the remaining 20%. He says Fonterra is well aware of this and works with the Government and farmers to boost local milk production.

"We feel it is important to tap into growth opportunities and we play a role in the local dairy industry," he told Dairy News. "To maintain our leadership position, we need to be involved in the local industry. We have built strong links with local communities and the Government."

Fonterra has about 4000 farmer suppliers in Sri Lanka, the biggest farmer milking 20 cows and the average farmer milking four-six. It collects about eight to 10 million litres of milk annually.

Clement says though the Sri Lankan industry is not incredibly efficient there is a shift in its thinking. "Farmers are increasing production and we are supporting sustainable farming families."

Fonterra is training and advising Sri Lankan farmers on nutrition management, animal health and treatment of mastitis with a view to milk yield.

Clement says the aim is to get most farmers up to 20 milking cows, producing quality milk.

The co-op is also supporting school infrastructure in dairy communities.