Second round of milk tests loom 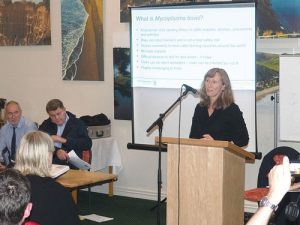 Farmers will undergo another national round of bulk milk testing in spring as the campaign to eradicate Mycoplasma bovis ramps up.

And a programme yet to be devised will be needed to test beef cattle, a public meeting in the North Canterbury town of Cheviot has heard.

It was the first of a new series of roadshows since the decision was made to try for complete eradication of the disease.

About 200 attended the standing room-only meeting, in a region with few dairy farms and where the only confirmed infected property so far was a beef fattening operation.

One unanswered question was on animals perhaps exposed as calves but milking for the first time.

The testing round would use both of the tests now in use, said Pleydell.

She explained that the pcr test looked for the bacterium in samples such as milk, blood, semen and sputum, but needed to be repeated because infected animals were not constantly shedding.

The second, the ELISA test, looked for an immune response. It showed that an animal had been exposed to the bacterium, not necessarily that it is immune to it. It could give false positives to other Mycoplasmas, so had to be confirmed by pcr.

ELISA had been used on blood until now but would be adapted for use on milk during the spring bulk milk testing.

Pleydell said some form of national beef surveillance would also be needed now that eradication had been decided on. But it was yet to be determined how that could be done.

Tonsils had been identified as a reservoir for the bacteria but until now swabbing tonsils was only an option at slaughter.  They were working with Massey University try to get a technique for live sampling.

“We haven’t done so much yet in the beef industry,” said Pleydell.

“We did work with the big feedlot down here in the South Island. About 700 source farms go into that feedlot and we did quite a bit of blood testing there and none of those blood tests came up positive.”

Asked during question time when the eradication programme would be reviewed to determine whether it remained feasible, BiosecurityNZ head Roger Smith identified the spring milking as the first big milestone, when stressed animals would be shedding.

Smith said phased eradication allowed farmers the chance to eradicate to a schedule suitable to them.

Some farmers wanted to cull immediately while others would delay it, such as for winter milking or to fatten calves to the 100kg mark.

“We want to work with each farmer who’s impacted to design an individualised plan so it’s owned by the farmer and owned by his farm advisors so he can work though this the best way he can.”

The cost of $886 million would be spread over 10 years through a levy process and across the industry not just infected properties, working out at only a few cents a kilo, he said.Long-term management instead of eradication could cost 2% in production year on year.

Smith emphasised that the disease still appeared to be confined to about 1% of the national herd. “We know we have one strain, three clusters. It started in one place so we have an opportunity to go for eradication.”

When the first cluster was identified in South Canterbury they were worried for the 65 neighbours of the 17 farms in the Van Leeuwen Group. Pleydell said the neighbours were all tested three times but the only one to come back positive had resulted from cattle intermingling after a breach of the fence.