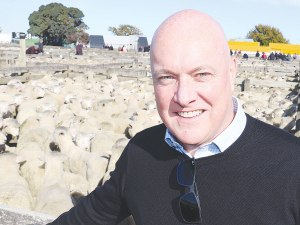 Christopher Luxon says the present government has spent much of its time running around with problems in search of solutions.

He says a lot of stuff has been piling on the rural community and likened it to sitting on the other end of the tennis court, getting 10 tennis balls thrown at you at the same time and you can't hit any of them. He points to the problems of rising inflation, increasing fuel and other input costs and supply chain challenges.

"We have had a situation where fruit has been sitting on trees rotting because orchardists can't get workers into this country.

"You are buried under a mire of regulation and this is coming from a culture within government that is really rooting in centralisation," he says.

Luxon hit out at the expansion of the bureaucracy during Labour's time in office, claiming the addition of 14,000 more 'pen pushers' in four and half years. He also points to what he describes as some dumb ideas being generated by bureaucrats, such as the plan to spend $800 million on a walking bridge across the Auckland Harbour that might draw 3,000 people on a good day.

The Leader of the National Party is accusing Labour of painting farmers as villains and effectively the enemy, which he says is certainly not the case.

National Party leader Christopher Luxon says a fresh look is needed at the primary sector to ask what problems the country is trying to solve and what sort of regulation is needed to solve such problems.

OPINION: In my very first speech as National Party Leader, I said that our farmers are not villains.

With just 10 days under his belt as the National Party leader, Christopher Luxon last week rolled into Morrinsville, unofficial dairy capital of New Zealand, to let the party faithful and undecided in on what plans he had for the future.