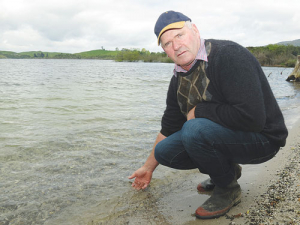 Te Ara Miraka financially rewards its suppliers for meeting five criteria: people, environment, animal welfare, milk quality and prosperity. Within these are 31 criteria, 13 of which farmers meet. These in turn are extrapolated out into a points system – all told 100. A supplier who passes the mandatory ones gets some sort of incentive, and achieving 100 points will get the supplier an extra 20c/kgMS at the end of the season.

Hamilton says the good thing about Te Ara Miraka is that it’s possible to get part of the incentive payment in any year, provided you meet all the mandatory criteria.

He says this system allows a farmer to ‘stage’ development projects and still be rewarded.

“For example on the one farm we have that supplies Miraka, we put in a lined effluent pond on the basis that we would get an extra 3c/kgMS. The cost of the pond was going to be $80,000 but the 3 cents would amount to a 12.75% return. So it encourages one to move forward in terms of environment and sustainability,” he says.

Hamilton says the other dairy companies don’t offer anything like this, which he describes as a “well thought out scheme”.

He says the problems with both Westland Milk Products and Fonterra is because they are cooperatives, they believe every supplier should get the same price for their milk.

Hamilton says he also likes the overall Maori culture of Miraka, similar to the culture of his own company: not just what’s good for today, but looking after the needs of future generations.

Taupo Miraka Dairy company has approved its final milk price for the 2017-18 season and has updated the current season’s milk price forecast.

It says with the addition of the average Te Ara Miraka premium of $0.13/kgMS, that accumulates to a final Miraka milk price of $6.80/kgMS, which is at the top of the forecast range.  Te Ara Miraka is an incentive scheme run by the company whereby suppliers can earn up to an additional 20c/kgMS if they meet all the scheme’s criteria.

The company says with recent declines in the global dairy markets it has reviewed the forecast base price for the 2018-19 season to a range of $6.30 - S6.60/kgMS. When added to an estimated weighted mean Te Ara Miraka premium of $0.15/kgMS, this accumulates to a forecast Miraka milk price of $6.45 - $6.75/kgMS.

The company says it has performed well over the past year, achieving a positive net profit while maintaining a strong balance sheet.  It is focused on value creation which is providing tangible returns to the business; the net result will be less reliance on the core commodity business in the future.