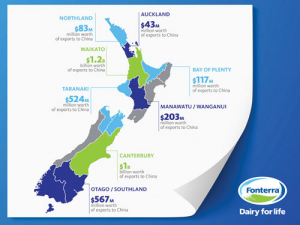 Fonterra produced and exported $3.8 billion in dairy products to China in 2017/18.

Regional New Zealand is punching above its weight in the relationship with its biggest trading partner, China.

In a message to mark the Chinese Year of the Pig last week, Spurway noted that last year NZ exports to China were worth at least $16.6 billion, and $3.8b of that was generated by Fonterra in rural and regional NZ.

In total, about 25% of Fonterra’s exports go to China and are consumed by about 150 million people.

“We’re not just talking about milk powder either,” says Spurway.

Fonterra mozzarella tops at least 500 million pizzas and NZ cream goes into 500 million tea macchiatos every year.  “A little bit of NZ is ending up on shelves and tables across China and in return that product is helping put food on Kiwi tables,” he adds.

“The benefits of our relationship with China flow into communities as our employees and farmers support businesses, schools and other local organisations across the country.”

Waikato is among Fonterra’s biggest regions for China exports, totalling $1.2b in cream, cheese and milk powder -- about $2500 per person in the region.

“I’m fortunate my job has taken me to China a fair number of times and my sense of pride is as strong as ever when I see our products on shelves, in bakeries and in beverages.

“It’s special knowing that a little bit of regional and rural NZ has found its way into the lives of people in Shanghai, Beijing and Dongguan.”