Pile of awards for long-term sustainability 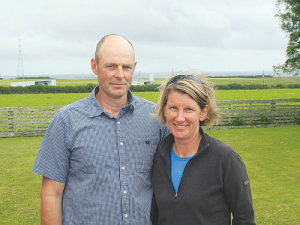 The Carvers farm Holmleigh, a 515ha family property at Ohangai, east of Hawera. They combine dairy and drystock farming on the flat-to-steep property.

With an eye on the long-term viability of their farming business and the environment, Carvers have a sheep and beef breeding and finishing unit and the 95ha dairy platform they developed to start milking in the 2014-15 season.

The award judges describe Holmleigh as a tidy, functional farm based on well-designed and executed environmental planning for long-term sustainability of the land. Carvers’ impressive system gives huge flexibility while helping to ensure a sustainable business, the judges say.

Carvers are proud of the farm’s progress.

“The farm has been re-grassed extensively, there is new water reticulation to most paddocks, access tracks and laneways have been created, fences have been improved and some areas vulnerable to erosion and weed infestation have been retired and planted.”

Tyler Judd has been dairy manager since 2014, starting in the spring in a new 40-bail rotary cowshed. Next season Judd and his wife Rachel will start contract milking on the property. From the outset Peter Carver has worked as an extra labour unit and regularly milks to cover Judd’s time off.

Production has risen steadily on the system 1-2 dairy unit. This year they are on track for 125,000kgMS (480kg/cow). There is 8ha of chicory and 2ha of turnip plus grass cut for silage on the milking platform. Also, 5.5ha of maize is grown on the drystock area of the farm. The cows are all wintered on the dairy platform.

During the conversion the Carvers installed larger-than-required infrastructure such as effluent and milk storage.

“The land in dairy is a good size. We could convert more but don’t plan to in the near future as we still want to be able to finish the stock we breed.”

Romney ewes are run in two mobs. Early weaning ensures ewes retain condition and can go on their own pasture rotation for the summer and into tupping. Finishing weight for the lambs averages 18.5kg. There are 50 Angus breeding cows with Angus bulls used for both the beef and young- and late-cycling dairy cows.

All progeny are finished and some bulls are sold for dairy service. All dairy calves are reared.

Peter Carver graduated with a Diploma in Farm Management from Lincoln University. He tracks his environmental and soil awareness back to that study time. Carvers are strong advocates for no tillage and use a Cross Slot drill for most of their cropping.

“The one pass system is efficient and we see it as important to keep the soil structure intact,” Carver says.

Soil is tested before crops go in and nutrients are broadcast and direct drilled at planting. Soil protection is a primary consideration for them in grazing management. “We have a high rainfall so we have to be careful, especially with cattle on the hills in winter.”

The Carvers are progressively retiring erosion prone land. Working with the Taranaki Regional Council Waitotara Stress Scheme they have planted 25ha of pines and 5ha of redwood in woodlots. The planting of poplar for erosion mitigation and stock shelter is ongoing.

There are many natural springs in the farm’s hills. The largest one has been fenced and runs two water rams that form part of the reticulated stock water system with troughs in every paddock.

Peter’s parents Gerald and Faye bought the original 390ha of Holmleigh – including 142ha of West Coast lease – in 1990. Peter and Nicola returned from managing a bull and dairy grazing unit in Waikato in 2002 and the Carver family partnership added a 125ha farm adjoining Holmleigh in 2004.

Peter and Nicola have three daughters: Emma (15), Abby (13) and Jodi (11). Nicola manages the farm books and teaches at a high school in Stratford.

Gerald is still active on the farm and shares his passion for horses with his three granddaughters.