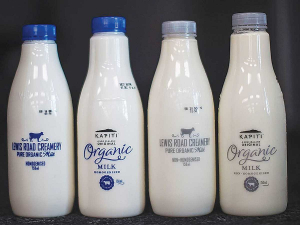 The report, which looks to measure the growth of the organics sector, states that New Zealand’s organic dairy sector has grown by 55% since 2017 to be valued at $153.7 million.

The average herd size on an organic dairy farm in New Zealand stands at approximately 300 cows, compared to 440 cows in the average non-organic herd.

At a launch event for the report, Fonterra global business manager organics Andrew Henderson said organic dairy producers tended to have a lower stocking rate when compared with conventional farmers.

“Overall, I think if you look at it on a per kilo milksolids basis, organic farms on average are about 20% down and a lot of that’s to do with synthetic fertilisers, but also around that stocking rate as well.”

He added that, overall, organic farming was better for the environment, with lower nutrient run off.

“We still have a long way to go; a little bit of a journey to continue to educate consumers globally on what organics is,” he said.

The report states that China is the largest importer of New Zealand dairy, where other sectors have more of a focus on the United States, the United Kingdom and Europe. “China is also one of the fastest growing markets for organic dairy products in the world,” the report states.

Exports to China had reached $81 million in 2020, according to the report.

OANZ chief executive Viv Williams said that the report showed how the organic sector on the whole represented New Zealand.

“Ours is a diverse sector ranging from the organic operations of corporate leaders like Fonterra and Zespri to community initiatives to promote local food security,” Williams said.

“We are confident we can do more as we realise our full potential to expand further.”

OPINION: The Chinese owners of Australia’s biggest and oldest dairy farming business are facing scrutiny from authorities and all eyes are on Fonterra.