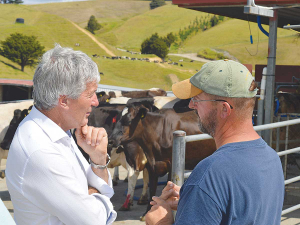 Northland farmer Scott Taylor says rain is urgently needed in parts of Northland to snap the long run of hot and dry days.

Taylor says milk production is falling behind compared to last season as farmers are drying off early. On his farm in Tangiteroria, midway between Whangarei and Dargaville, Taylor has dried off cows that would be calving in autumn: he’s done this a few weeks earlier than usual.

“We need rain soon to ease the pressure, if not things are going to get quite difficult.”

He says Northland farmers have also adjusted to the dry summers by split calving. Taylor switched to split calving three years ago.

“Split calving takes the pressure off spring,” he says.

Northland’s winter is mild and this allows more grass growth than other parts of the country.

“Parts of the region are still green and there is some grass growth but every day without rain takes us a day closer to difficulty.”

Two weeks ago, Taylor hosted Minister of Primary Industries Damien O’Connor on his farm, where he milks 380 cows.

He says O’Connor talked to him and some neighbouring farmers about the onset of dry weather.

“It’s good to see the Minister out and about in Northland,” he says. “It gives us a chance to have our say and exchange thoughts with him.”

O’Connor, who spent a day in Northland, says ground conditions across the region are varied.

He praised the resilience of farmers, saying good farmers are more prepared for such climatic events.

“Most farmers have got it... they need to be more prepared in future for disruptive events.”

O’Connor says mixed farming models will help farmers not only diversify their income but provide buffer to their incomes during droughts and floods.

On the possibility of a drought being declared in Northland, O’Connor says his department is working with Federated Farmers and Rural Support Trust with “a set formula”.

“We must not overreact and too quickly declare a drought, building reputation around an area for being unreliable as a farming block,” he says.

“There are downsides to declaration of a drought such areas can be seen as losing the ability to farm sustainably and this can impact land values.”

Prime Minister Jacinda Ardern has got into the act over the drought by announcing a major new relief package in Northland.