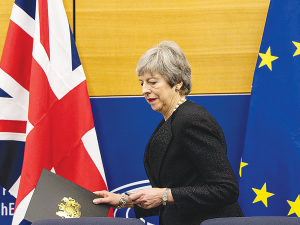 British PM Theresa May is struggling to find a Brexit compromise.

Even the most experienced commentators are flummoxed by what is happening in Westminster.

Kimberly Crewther of the Dairy Companies Association of NZ (DCANZ) says most companies are thinking through what the different scenarios mean for them.

“They are watching the developments to understand them and are looking at information from NZ government agencies such as the Ministry of Foreign Affairs and Trade and MPI have on their websites. They have been putting out a lot of information but at the moment it’s very much a watch and see scenario,” she told Dairy News.

Crewther says some arrangements for ongoing trade with the UK have been signed, but what happens in the end depends on what the British MPs decide.

There are complications on the horizon such as the European Parliament elections due at the end of May and if Britain doesn’t leave before then it could well be caught up in these. To say the situation is fluid and complicated is an understatement, she says.

New Zealand’s special trade envoy Mike Petersen describes the situation as terrible mess. He says exporters are getting more and more concerned and all are making contingency plans for a no-deal Brexit which would be disastrous for both the UK and the EU, he says.

Petersen is reasonably certain there won’t be another referendum.

“No one would want to put the UK through that horrible process -- it’s too divisive,” he says.

Petersen believes that Conservative party members will finally fall into line behind Theresa May because they don’t want an election with the prospect of Jeremy Corbyn becoming prime minister.

Petersen notes that with the prospect of Brexit some NZ companies are looking at having a stronger presence on continental Europe and moving some staff from London to Brussels and Amsterdam where Fonterra is based. He says he knows of some companies that have registered new offices in Europe.

“Where they register these offices will depend a lot on their customer base and key ports of entry to Europe such as Rotterdam in Holland and Antwerp in Belgium,” he says.

But Petersen says the changes brought about by Brexit are unlikely to result in more NZ staff being employed by exporters to Europe. He says most likely some may move from London to Europe.