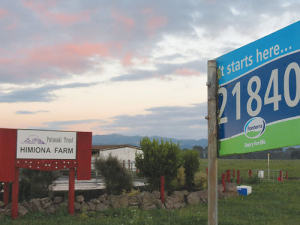 The Putauaki Trust in Bay of Plenty hopes to have its own milk powder plant by 2019.

A new Maori-owned new dairy factory is being planned for the Kawerau region, modelled on the first Maori dairy company Miraka, near Taupo.

The new plant, to make milk powder, will use geothermal power owned by Putauaki Trust, one of the Maori trusts in the project. Miraka has just such a deal with one of its geothermal power-owning partner trusts.

Maori leader Tiaki Hunia, a leader in the development, is chairman of the Putauaki Trust which has dairy farms around Te Teko and Kawerau. One of the farms, Himiona, named after his late father, was a finalist in the Ahuwhenua Trophy for the top Maori dairy farm in 2014.

Hunia is a solicitor and is the general manager, trusts, for Te Tumu Paeroa. He is also deputy Māori trustee and a director of trusts, companies and iwi authorities. He is a member of the Institute of Directors and the New Zealand Law Society and is highly regarded in Maoridom and the agribusiness sector.

“We are very excited about the project,” Hunia says. “We have seen what Miraka has done and we’d like to emulate this. The idea is... to utilise what we have -- clean natural resources with dairy farms locally.”

There has been a tradition in eastern Bay of Plenty of Maori trusts working together to scale up their dairy operations for greater economic viability. Hunia says they intend to work together.

“I am involved because the factory will be built on our land, but six or seven other Maori trusts will be involved in the project, from Rotorua, Bay of Plenty and down to Opotiki.”

Hunia says at this stage they expect to have 15-20 farms -- about 9000 cows -- supplying the new factory. But he emphasises it’s early days and the governance structure of the new entity has still to be finalised with all the interested parties. And they must finalise finance and get resource consents.

Leading the project is Poutama Trust, Rotorua, supported by Te Puni Kokiri; it could produce its first milk powder by 2019.

The Putauaki Trust is a relatively new entrant in dairying, having bought Himiona farm in 2006.

Until then its main activity was raising beef and grazing dairy cows on its land near Kawerau, a forestry block and an interest in geothermal power, also at Kawerau.

The enterprise mix has expanded to include dairying, maize growing, manuka for honey, industrial land uses and a composting business.

The original land purchase was just 57ha – barely economic -- but since 2006 the trust has acquired leases from several smallholdings and built up the milking platform to 180ha running 570 Kiwi cross cows.

In 2015 Putauaki Trust converted its drystock property at Kawerau into a 650-cow dairy farm.  This included a $1.5 million 54-bail rotary cowshed. The property is partially irrigated.

Bag of ‘tools’ to save environment

Floods in April and continuing rain are costing some Bay of Plenty farmers up to $700 per cow to repair damage and buy extra feed.

$30 MILLION will be invested in building 10 kiwifruit orchards on Maori land in the Bay of Plenty and Gisborne over the next 18 months, says entrepreneur Te Tumu Pairoa, in partnership with Quayside Holdings.