Methane not off the hook 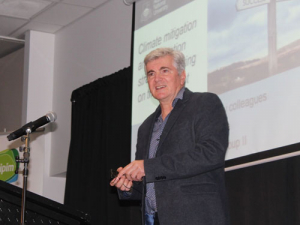 Methane prompted a number of questions from rural professionals to experts last week, but none of the answers gave any joy to those who think methane should be a special case among greenhouse gases (GHG).

“Unfortunately the science is pretty solid: methane is a GHG and accumulation of methane warms the earth,” says Professor Mark Howden, Climate Change director at the Australian National University.

The standard view on methane is that it is shortlived compared to, say, carbon dioxide, but nevertheless it has a net warming effect on the globe, he told the NZ Institute of Primary Industry Management conference.

“That has been established very well.”

Methane from a cow contains some biogenic carbon (from the grass) that goes into the atmosphere and then gets oxidised and forms carbon dioxide and then goes back into the grass. However a study by Howden in 1990 showed that to be a very small amount – no more than 10%.

DairyNZ’s Nick Tait, who helped set up Dairy Action on Climate Change, says methane gas is short-lived: about 12.4 years is its residence time in the atmosphere. But it can capture energy so under the 2007 IPCC report on which the Paris agreement is based it is 25 times more potent than carbon dioxide.

‘’There has been a subsequent report which says it is higher than that, but that is not in the agreement.’’

That is the game we have to play internationally and to change that metric would mean a lot of political manoeuvering among the 127 countries that signed the agreement.

Explaining what it meant by methane being a flow gas, Tait said methane is treated as about 25 times more potent than carbon dioxide.

But it doesn’t live in the atmosphere as long as other gases. The residence time is about 12.4 years but there is still some flow-on effect after that of 50-70 years.

“But it is obviously quite different from a gas like carbon dioxide; when you put it into the atmosphere it stays there. Then you put another bit on and it adds on top. That is what we call a stock gas; it ramps up over time.

“But methane, because it is only a short-lived gas, as you put more in, as long as you don’t increase the concentration over that 60-70 lifetime, what you put in eventually will be coming out and sequestered back.” – Pam Tipa

A global animal health company is welcoming the Government’s discussion paper on the use of agricultural inhibitors.

Agriculture Minister Damien O’Connor is predicting huge international demand for a native seaweed if research proves its worth as a potential methane buster for agriculture.