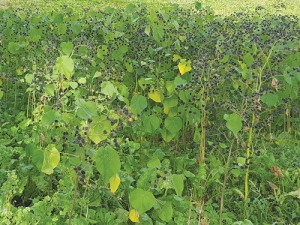 Velvetleaf were found in 11 regions around the country.

Rural contractors have been reminded to play their part in preventing the spread of velvetleaf as management of the pest weed enters a new phase.

"Contractors need to be conscious of the potential for spreading velvetleaf when moving between properties, or between areas of the same property, and to take responsibility in managing these risks," says Rural Contractors NZ (RCNZ) president Steve Levet.

The Ministry for Primary Industries says property searches across the country have ended. Searches were held on 600 properties from March. Velvetleaf was found in 11 regions on 215 properties associated with fodder beet.

It says landowners and farm contractors need to be vigilant about cleaning machinery when entering and leaving a property, and checking suspect maize silage and crops.

Ministry for Primary Industries (MPI) director of investigations, diagnostics and response, Veronica Herrera, says the operation has involved many people including volunteers.

"People have literally been trudging through vast areas of fodder beet and, in some cases, very rugged terrain in a bid to find and destroy velvetleaf plants," she says.

"MPI has established that some lines of fodder beet seed grown in Italy and pelletised in Denmark were contaminated with velvetleaf. These lines have been banned from entry into NZ.

"We continue to inspect seed from other sources to determine whether any other lines are contaminated.

"In addition, the import requirements in the Import Health Standards will be reviewed in light of the learnings from this response, the inspections at the border and a pathway assurance visit by MPI officials to the growing regions coming up in June."

Herrera says in the meantime the messages on managing velvetleaf remain the same.

"It's imperative we don't become complacent; vigilance is the key to managing this. Landowners need to continue inspecting their properties for late-emerging velvetleaf and farmers should ensure their onfarm biosecurity measures are robust and enduring."

MPI will continue to manage the velvetleaf 0800 number and provide advice and material on managing velvetleaf.

RCNZ's Levet is reminding contractors about the importance of biosecurity and machinery hygiene practices on and between farms, in controlling the spread velvetleaf, and he says rural contractors have an important role to play in this.

"Farmers and other professional operators in the rural sector like contractors need to pull together to help protect our agricultural sector from the spread of velvetleaf and other pests. I want to remind rural contractors to stay vigilant and keep up sound biosecurity practices."

Levet says RCNZ has worked with national pest agencies to produce guidelines for machinery hygiene to prevent the spread of pests and weeds, which includes a hygiene logbook: www.ecan.govt.nz/publications/general/keepitclean.pdf

"MPI remains engaged in this process and we'll be spearheading a national [means] of containing and potentially reducing geographical spread over time," she says. This may include local elimination in some regions.

"We are now developing a transition plan... with key stakeholders, until a long term management plan is in place.

"Workshops will be held over the next few weeks where we will be seeking input on interim measures and long-term management."