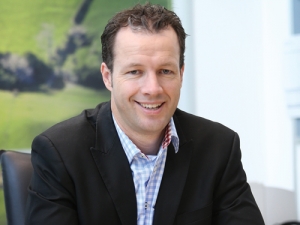 Like a lot of dairy farmers, I am pretty happy about farewelling 2015, and looking ahead to a New Year with better prospects and farmgate milk prices.

Last year was certainly a testing time for dairy farming. First there was the aftermath of the 1080 infant formula threat that flowed on into the start of 2015. We also started the year with a low milk price that got lower as the year progressed and had some serious flooding on farms in the middle of the year across some regions. It was then rounded off by the welfare of bobby calves coming under the spotlight.

In all those cases the dairy industry banded together to overcome each challenge - by sharing information and support and by ensuring our collective voice was loud and clear.

With the low milk price we had about 40 farmers nationwide open their farm gates and their books, so that others could learn from their experiences - good and bad. They were happy to share this information as part of DairyNZ's Tactics campaign through events, online and in the news.

DairyNZ also had to look at doing things a bit differently and asked farmers what they wanted in terms of support. In August 2015, as part of the Tactics campaign, DairyNZ staff conducted one-on-one feed review visits to help assess feed allocation and discuss spring feed management plans. About 900 dairy farmers received a visit nationwide.

Rural professionals stepped up in this area as well. An example of this is accountants offering an hour of their time for free, to support one of the groups most affected by a low milk price - variable order sharemilkers. Working in partnership with Federated Farmers and the dairy companies was also an important part of the approach to ensure all farmers knew we had their backs and were there to help them.

As we look to 2016, we are not out of the woods yet. The milk price is still low and on top of that we are facing a potentially dry summer in some regions because of an El Nino weather pattern.

On top of all this, we are also dealing with the questioning of our reputation - where the action of a few let us all down. When video footage of the treatment of bobby calves was recorded by animal rights group Farmwatch and released as part of a SAFE campaign in November, I was immensely proud of how dairy farmers stood up and wanted to be counted and heard through various channels, including social media. Their only concern, despite a tough year and low milk price, was the welfare of those animals. You all showed how much you really cared. New Zealand heard you - and got in behind the need to show support for our industry and our farmers.

At the time I was reminded of a quote from a famous American basketball coach, John Wooden.

We must, as an industry, continue to focus on building our character. We also want to keep hearing from farmers about the kind of support that they value the most and want us to deliver.

We've worked together as an industry to survive a tough year. Now we have to look forward to a New Year - and make sure our resolutions as well as our reputation are strong.

• Tim Mackle is the chief executive of DairyNZ.

OPINION: GoDairy is another example of the NZ agri sector spearheading the country’s journey through Covid-19.