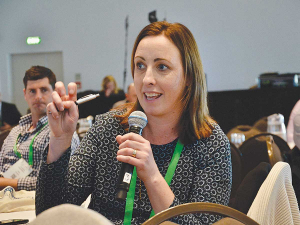 That’s the word from Federated Farmers regional vice president Bernadette Hunt who says these farmers are saying that winter grazing is attracting too much negative attention and with the rules changing all the time it’s not worth the hassle.

She says if more dairy graziers take this view it will pose problems for dairy farmers because nobody is allowed to do any more winter grazing than they are already doing. Hunt says this raises the question of what will happen to those animals next year if they can’t get grazing.

In the past week there have been meetings between farmers and officials to try and find workable and sensible changes to the impasse over the new fresh water regulations.

Hunt says she’s never heard any opposition from farmers for the need to improve the state of waterways. But she says there is massive concern that the focus on three or four specific rules relating to water quality is actually diverting attention away from solving the problem.

“A couple of months ago, people were talking about winter grazing and the conversation was about buffer strips, riparian planting, protecting critical source areas, sediment traps – and now the conversation is about centimetres, degrees of slope and dates. The conversation has gone from being proactive and absolutely focused on outcomes to being really reactive and focused on inconsequential details,” she says.

Hunt says if the rules remain as they are now, there will be huge costs for both Southland farmers and ratepayers. She says Environment Southland says it will have to hire fifty extra staff in their consents team alone to deal with the new rules.

She says every consent that is lodged by a farmer will have to undergo due diligence, meaning it would have to be checked out for Maori cultural values and its effect on water ecosystems, among many other things. She says when and if the consent is granted, another layer of bureaucracy will be needed.

“They will then need staff to monitor and enforce those consents, which will create a huge cost and bureaucracy and cost that is of no benefit to anyone. If we don’t change the rules there will be people out there measuring the depths of hoof prints and that is absolutely daft,” she says.

Hunt says there is no way that Environment Southland can do “quick and dirty workarounds” to get around the new rules. She says, if they do, they face the risk of legal action, but unless the rules are changed and made workable, farmers will continue to find ways to operate despite the rules.

“Farmers are really innovative people and as quickly as government officials are writing these prescriptive rules, farmers are figuring out how to get around them. That’s what I mean about perverse outcomes – so instead of focusing on doing the really good things, they are now looking to see if there are loopholes, and there always will be. That’s why government needs to win the hearts and minds of farmers, because if they don’t, farmers will just find ways to manage around the crazy rules.”

While there are ongoing discussions about the situation in Southland and other parts of NZ about winter grazing, Hunt says there seems to be a blockage at the top – meaning the Minister for the Environment, David Parker.

“I don’t believe we are getting through to Parker on winter grazing. I think he is hearing something about the other things like the low slope maps, which relate to stock exclusion. But on winter grazing he is absolutely unapologetic and seems to regard winter grazing as the most significant contributor to waterway degradation and is determined to regulate it. I think he believes that every winter grazing operation should be consented and heavily regulated and he sees prescriptive rules as the way to achieving improved waterways,” she says.

But Hunt believes that this prescriptive approach will not work, whereas an outcomes based system will work.

What’s going on in southland? — Editorial

OPINION: It is hard to fathom exactly what’s going to happen in Southland in light of the impact of the Government’s new freshwater regulations.

About 50 migrant dairy workers could potentially benefit from the Government’s border exception for work visa holders.