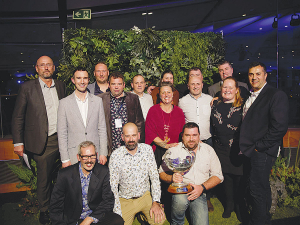 At the co-operative's annual best site cup awards recently, Edendale picked up the prestigious Transformation Cup for their sustained performance over the last three years across budget, team engagement and product quality.

Fonterra handed out 18 awards at its annual best site cup awards which recognise excellence in manufacturing. Now in their 15th year, the awards recognise successes in a range of areas including sustainability, innovation and efficiency.

"In addition to the normal conditions they have to contend with, like natural weather events and the peak milk processing, this year the team also had to operate under tight COVID-19 restrictions.

"Despite these restrictions the 26 sites across New Zealand managed to collect 17 billion litres of our farmers' milk and processed that into almost 3 million tonnes of high-quality dairy products shipped to 140 countries."

The awards spark a bit of friendly competition between Fonterra's sites and while not everyone takes home a cup it's a great chance to celebrate some exceptional work.

The Medium Site Cup went to Northland site, Kauri for its sustained health and safety performance, good culture and engagement with the local community, including supporting with flood relief.

The Small Site Cup went to Stirling site in Otago for the second year in a row. The team was rewarded for its health and safety performance this season.

The Sustainabilty Cup also went to Pahiatua in Wairarapa for second year running for its focus on reducing water, energy and waste.