Fonterra tanker to moon and back 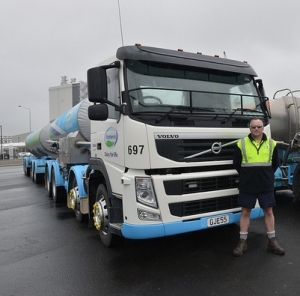 For Darfield tanker operator Rowly Stewart it's hard not to get attached to a tanker you've driven for six years – especially when you've travelled the equivalent of getting to the moon and back - twice.

On average one of Fonterra's tankers will rack up around 1.6 million kilometres on the road and pick up 239 million litres of milk before being retired.

"When you drive the same tanker about 500km each day you become quite attached to it. At the start of every shift I always take my tanker through all the safety pre-checks and make sure it's clean and polished before I take it out onto the road," says Rowly.

Fonterra general manager national transport & logistics, Barry McColl says the tankers are known for their reliability on the road and are always well-serviced and comply with safety standards. "However there is a point in their life where you need to replace them with new ones to maintain overall fleet condition and reliability."

"The co-op regularly upgrades our fleet because of the vast number of kilometres travelled – and next season will be no different with around $30 million set aside for 79 new tankers in 2013."

The 79 new Volvo tankers will replace some of the older tankers as part of the cooperative's ongoing programme to upgrade its 500 strong fleet – the largest bulk liquid transport operation in New Zealand.

"The new Volvo trucks are more fuel-efficient, have lower running costs and improve the environmental and economic efficiency of our milk collection operation," says McColl. "Their stability and braking systems are also very sophisticated, making them safer to operate."

The new tankers are due to arrive in June 2013, with a gradual phasing out of the older tankers from February next year. The tankers are primarily assembled at the Fonterra Morrinsville Service Centre and by mid-August 2013, the full fleet of 79 is expected to be fully operational.

Most of the older tankers will be sold for less intensive use with some being dismantled for parts. Fonterra has also provided a few of its retired tankers to rural fire services around New Zealand.