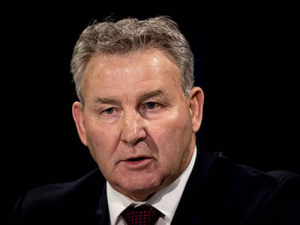 Fonterra chairman John Monaghan has hinted that he may step down next year.

A farmer-elected director Monaghan is due to retire by rotation at the 2020 annual meeting, normally held in November.

In a note to farmer shareholders today, Monaghan said he will be working with the board next year to facilitate chair succession.

“Having seen through the introduction of our new strategy, operating model, and with our divestment and debt reduction efforts well progressed, I will be working with the board in 2020 to facilitate chair succession,” he wrote.

“The timeline for that succession will be agreed by the board nearer to the time.”

A chairman-designate could be elected by the board early next year, allowing time for a smooth transition before Monaghan retires in November, 2020.
The chairman is elected by the 11-member board, made up seven farmer-elected directors and four independents.

Under Fonterra’s constitution only farmer-elected directors can hold the chairmanship.

Former Zespri chairman Peter McBride was touted as a future chairman when he was elected to Fonterra’s board last year.

Among sitting farmer-elected directors, Leonie Guiney has four years of board experience: the longest serving farmer-director after Monaghan.

It was also announced today that independent director Simon Israel will retire in November.

Monaghan told farmer shareholders that succession planning is a priority for this board.

“As you would expect, we have open discussions within the board on development and succession.

“Those conversations include professional development plans for all directors; diversity; connection back to the farm; skills and experience on the board; and the appropriate length of term for all independent and farmer directors – including the chairman.”

Monaghan has been a director of Fonterra since 2008; he was elected chairman in July last year.