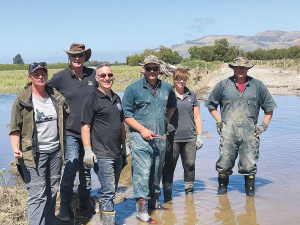 “I was talking to an arable farmer who’s lost a lot of arable crops and the cost to them is about a quarter of a million dollars.

“A lot of people are on a much smaller scale than that but the number of affected farms that will be incurring costs are high.”

Hunt said the feed situation in the province would be very challenging because other parts of the country are in drought with little feed to spare.

In the very short term there had been a lot of feed moving around the province over the last few days but longer term would be a challenge because a lot of winter crop and baleage has been lost.

“We were already short in Southland with the challenging season we’ve had so there’s going to be some people getting their heads together to try and come up with a solution to that over the coming days.”

Hunt, who was co-ordinating Farmy Army volunteers to go into farms to help the clean up, said clearing debris that had ripped through farm fences was the main work of the volunteers.

“Most of them don’t have specialist farming skills so if they can go along and clear the fencelines then the farmers themselves can go along or get contractors to come and actually do the repair work. But all that rubbish has got to be gone first.”

Fence damage was very widespread but there had also been a lot of damage to lanes, tracks and even tanker tracks and farm entrances.

“A lot of that work involves heavy machinery and carting of stone and sand and all sorts.

“There’s a lot of that repair work needing to be done.”

In some cases underground water systems and underground cabling for electric fences had been ruined.

A lot of gravel had been deposited on pasture and would have to be removed, while baleage and “all sorts of rubbish” has been strewn across the land, Hunt says.