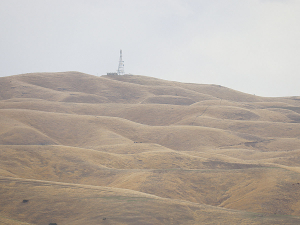 He told Dairy News they have had a much drier summer and with winter just about upon them the drought is now really starting to bite.

Wade, who farms near Takapau in Central Hawke's Bay, says he's been getting rid of surplus stock and reducing cow numbers going into next season.

"I am having to buy in extra supplement to get us through the winter. Based on what happened last year, I set aside some reserves of feed, but these are being eaten into now and I am having to buy additional feed. The cost of supplement is way above what I budgeted for," he says.

The difference this year over last year however is that there is supplement available albeit at a cost. Last year it was scarce.

But as the days and weeks tick by, dairy farmers are becoming increasingly concerned coming into winter, Dairy News is aware that on some farms, supplements make up to 80% of the feed intake for cows.

Farmers speak of the fact that rainfall has been pitiful, that groundwater hasn't been recharged and that streams have been reduced to a mere trickle due to the lack of rain.

The other concern for farmers is obtaining killing space for their cull cows at processing works.

"I was talking to my stock agent and he said space was quite tight for cattle, just with the whole of the East Coast being under quite a bit of pressure coming into winter," says Wade.

He says paddocks planted in new grass are struggling to come away and a couple of recent frosts haven't helped the situation. But he says the soil temperatures are still high enough that if rain comes the pasture could come away.

"But if we don't get any significant rain by the end of May - we are in trouble," he says.

Last year it was dairy farmers in Northern Hawke's Bay who were the worst hit, but the biggest problem is in the south around Tikokino and down into Central and Southern Hawke's Bay into Tararua district.

The situation is being closely monitored by MPI and the Rural Advisory Group and last week the Governmnent extended its assistance programme in the region until the end of June. This basically consists of offering advice aroud feed planning.

Wade says the message to farmers is to plan ahead, look at their options and make timely decisions around getting rid of surplus stock and finding grazing outside the region for younger stock.

"It's all about setting up for the next season," he says.