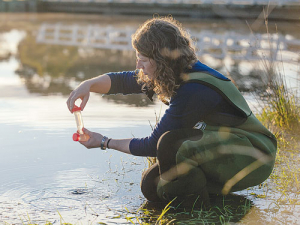 Fonterra's director of sustainability Carolyn Mortland says she is very heartened by the work farmers are putting into the environment.

“I think we will see it really turning around in future years,” she told Dairy News.

Fonterra recently put out a progress report on its six commitments to improve waterways -- one year on from launching the actions.

As part of onfarm action Fonterra now employs 24 sustainable dairy advisors (SDAs) nationwide and is due to have 28 by the end of 2018, on the way to a target of 30 (double last year).

“The SDAs are a core part of the service we provide for farmers. Having one-on-one support where someone can come out and have a look at your milking shed, effluent system and farm system and talk to the farmer specifically about what might work on their farm is hugely helpful.

She says it is a specialised ability to understand farming and also the environment. “So it takes a while to recruit and train these people. But we are building to 30; we have had huge recruitment this year.”

Livestock exclusion from waterways has reached 99.6%, a figure Mortland says they were close to at the beginning of the year. “We were at about 97% last year and this year has seen that final push.

“Farmers have done a huge effort to fence their waterways and put in bridges or culverts, so now it is really finishing off those final few; or sometimes farmers have had fences washed away or erosion in which a fence has been lost.

“So we are really talking about those really final things; we would say now we are complete.”

Tiaka is Fonterra’s support programme for environmental work with farmers; there is a big push is to get every farm to have its own farm environment plan (FEP).

“[The plan] will have a prioritised set of actions for the farmer and what they can do to improve environmental impact. It will cover management of effluent, maybe riparian planting, and maybe some steep marginal land the farmer doesn’t really use for production that they might want to plant. It will look at boggy wet areas of the farm at risk of run-off into waterways and how can they repair that or plant it out or change the way they graze their cows to improve the impact.

“It is a tailored plan designed to address water, biodiversity and some environmental issues in the catchment.

“Farmers say they really like it because it gives them a prioritised set of actions that they can achieve over the next few years. Farmers, like everyone, can’t do everything at once and they need to prioritise what is most important and what is going to fit for them and their farm and the financial situation.

“We hear from farmers that having that list they have talked through with the SDA means they can just knock it off as they go along and that’s really powerful.”

Fonterra has used geospatial mapping to make a digital map of every farm, she says.

“When the SDA goes out they can look at the farm on the iPad; they have the boundaries of the farm, they know where all the waterways are and where the dairy shed is and they can take a picture of what area they are wanting to work on -- before-and-after photos.

“So it is there online for the farmers and can also show pictures of what needs to be addressed and why.”

There is high demand for SDA services. Some regional councils are requiring FEPs or are requiring some information that the FEP provides.