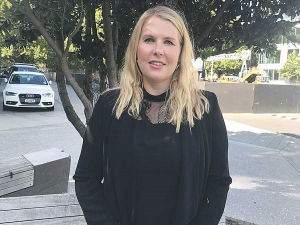 The programme began with two days of presentations and discussions at Fonterra’s head office in Auckland.

Now into its 15th year, the programme is an intensive year-long commitment built around a series of workshops, distance learning modules and coaching.

It exists to help identify and develop governance acumen in future rural leaders. Being custom designed in conjunction with Massey Business School to be specific to the cooperative context, it is unique in New Zealand.

Attended predominantly by Fonterra farmer shareholders and herd-owning sharemilkers it is also open to members of other New Zealand cooperatives such as LIC, Silver Fern Farms and Foodstuffs.  Competition was stiff for the two scholarships offered for the first time this year.

As well as sharemilking with her husband Glen on a family farm in Oxford, North Canterbury, she also works as a tutor for the agriculture industry training body AgITO, is a director of the Waimakariri Irrigation Company, Waimakariri Next Generation Farmers Trust and Canterbury Primary Sector Plan Change 7 Working Group, and is mum to three girls, including a three-month old.

Victoria is a descendant of Waitaha and Ngāti Māmoe, both of which are represented by the Ngāi Tahu iwi. She is also the eldest daughter of an established farming family with dairy, pig and arable farms, and a beef stud. Victoria studied fine arts at university, then taught agriculture and art at Christchurch Boys’ High School, while working part-time on farms and holding various leadership roles in organisations such as Young Farmers. She and Glen started sharemilking in 2015.

“We’re working hard to build our business and move towards farm ownership but, because this is my family farm, I’m also constantly driving for perfection,” she says. “I feel like my tūpuna [ancestors] are looking down and saying: ‘Good luck’!”

She is equally keen to learn more about governance and use that knowledge to gain seats on both the New Zealand Pork Industry Board and the Fonterra Shareholders Council. She dreams of one day being elected to the Fonterra Board: “I feel like I have quite a long way to go to get there!”

Trinity Lands chief executive and Fonterra board member Peter McBride helped assess the scholarship applicants and said it was clear Victoria could handle everything a demanding governance role would throw at her.

“It was clear from Victoria’s application that she was a hard-working and determined woman with an impressive depth of experience in farming, education, and advocacy – and big farming dreams,” he says.

Trinity Lands was established in the 1950s and 1960s by Christian businessmen from the South Waikato, with the aim of helping young people build careers on the land. Their portfolio of farms and orchards supports young people into farming careers and enables the distribution of hundreds of thousands of dollars in grants to community groups every year.

The scholarship, offered in the memory of Ian Elliott, the late chairman of Trinity Lands, provides the chance for a person of Māori heritage to participate in the Fonterra Governance Development Programme. Ian had personally mentored countless young New Zealanders working on Trinity Lands’ farms and his own properties, and Victoria shares his passion for developing future farmers.