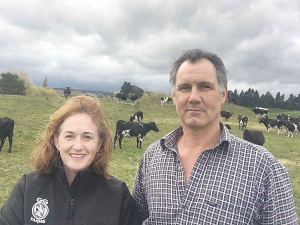 The award recognises dairy farmers who demonstrate leadership in their approach to sustainability, who are respected by their fellow farmers and their community for their attitude and role in sustainable dairying. The award is part of the dairy industry awards, which were announced recently.

The couple run 450 cows on their 220ha farm (170 effective) at Patoka, north west of Hastings. They have been dairy farming for about 30 years, starting as sharemilkers before buying the farm outright earlier this year.

Nick Dawson says winning the award means a lot to himself and wife Nicky because they were nominated for the award and didn’t enter the competition as such.

“We were nominated by our local Fonterra area manager – which was quite nice,” he told Dairy News.

“We then got interviewed on Zoom by a panel of three people, which was unusual because we couldn’t show them the physical part of the farm. But we enjoyed the experience anyway.

“I think because it is called the responsible dairy award because it looks at the holistic picture about what we do on the farm, how we treat staff and also what we do outside the farm gate. It’s nice to be acknowledged for that.”

The Dawson’s have made a huge effort to engage with the Hawkes Bay community and schools in particular, to give young people an ‘on farm experience’ and to show that dairy farmers actively improve the environment to help dispel the myth of ‘dirty dairying’.

Nick Dawson says many kids today have no idea what a farm is like, let alone a dairy farm. The couple regularly host school groups on their farm and even give the young people a chance to milk a cow.

“It’s special to see their parents – who have had this notion of dirty dairy for so long – say that the farm is a lovely place and that dairying is a nice industry,” he says. “We try to do our bit to promote dairying in every way we can.”