Covers give calves a jump start 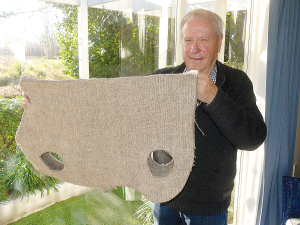 A Christchurch manufacturer of woollen calf covers says his newest product should find favour with the dairy farmers of Southland – even though his main market is the beef ranchers of North America.

David Brown is promoting his Fit N Forget calf covers, made of hessian-reinforced wool. They are sized for the typical American black Angus beef calf, at 85 pounds (38.5kg) liveweight and with leg holes more closely spaced than a dairy calf cover, to match their stockier build.

Selling online, his main market is in the northern states of Montana, Wyoming, and North Dakota, with their particularly harsh winters.

But Brown also sees a market for them in New Zealand, even on dairy farms, whenever a farmer is not seeking dairy replacements but is using beef genetics to enhance the value of his calves.

He sees particular value in the deep south, where dairy farmers calve in August but can experience bitterly cold weather episodes even as late as October.

He adds that calves produced on Wagyu genetics, which he says are thin skinned and slower maturing, can get a “jump start” by using the covers.

One Clinton farmer has tried them and described them as “brilliant,” said Brown.

“We’ll never be big in New Zealand but there’s help available should those guys decide to do that.”

A former South Canterbury farmer, Brown has been producing his Woolover brand covers for 25 years. His main products are covers designed for re-use, with straps and buckles, that must be manually removed.

However the Fit N Forget cover is simpler and intended to fall off as the calf grows and biodegrade where it falls.

It is intended for the North American ranchers who don’t want to have to “drive around in a blizzard” to manage them after the initial fitting.

Brown was on a Montana ranch in early 2021 to test the new cover in weather of minus 28 Fahrenheit. A vet used a thermometer with a sensor pressed against a calf’s flank to measure its external temperature, before and after putting a cover on it.

“And we lifted the temperature by 32 degrees in four minutes, which was just like you and I putting a jacket on,” said Brown.

Brown says he devised the new cover after an Idaho animal health professional who knew of his previous products alerted him to the attrition rate of beef calves in North America – 80,000 annually dying from hypothermia, according to United States Department of Agriculture figures.

Brown says that’s only 4% to 7%, and most ranchers write that off as a bearable cost, but he says a rancher spending $30 on a cover has a live animal a year later.

With calving fast approaching, dairy farmers and calf readers are planning for the busy months ahead. But NZAgbiz suggests that planning for long term productivity and profitable returns is about much more than preparing to cope with the demands of the season.

The pain scale medical professionals use with people isn’t applicable to animals. They can’t tell us whether they’re experiencing a 5 or a 9 out of 10. But that doesn’t mean they are not impacted by pain.

Feed calves well, get them off to a great start

Newborn calves rely on antibodies in colostrum for protection while their own immune system matures.