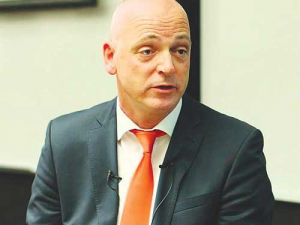 As Fonterra exports 95% of its products it must remain strong to take on global challenges, he said, while announcing the co-op’s half-year results in Auckland last week.

The results were consistent and in line with the co-op’s strategy, Spierings says.

On a global scale, dairy’s future remains strong as a demand-led industry, he says. Despite the recent slip in global dairy prices, overall the future remains very strong.

“However, geopolitical concerns remain because of some new leaders and statements being made here and there,” he says. “As we export 95% of our dairy products we have to understand what’s happening out there.”

Spierings notes that Fonterra has no influence on geopolitical events and cannot change them. However, it can influence value creation within the co-op with its strategy.

“But also important next to value creation is net profit and the strength of the balance sheet; we are in an extremely good position to go forward.

Fonterra’s total volume of milk processed during the six months fell by 7% to 11.7b liquid milk equivalents (LME, quantity of milk used in processed dairy product). The co-op attributes this to lower opening inventory and a cooler spring which affected milk production in New Zealand.

Despite lower milk volumes, revenue rose 5% to $9.2b because of higher milk prices. Operating expenses dropped 6%.

Spierings expressed pride in the co-op’s efforts to reduce operating costs, which “went down again by 6%, so year-on-year over the last four years we have seen a stronger company but with lower operating expenses.”

Its consumer and food service business was the star performer: volumes rose to 2.7b LME, gross margin rose 30% and normalised earnings before tax reached $313m.

“Our ingredients business maintained good margins. We made the most of our manufacturing capacity and the flexibility it provides to match production to demand and secure the best returns for farmers’ milk.

“This shows us doing what we said we would, continue delivering value even in a volatile environment,” says Spierings.

- Interim dividend of 20 cents per share, to be paid in April

- Moved an additional 227million LME of milk into consumer and foodservice products.