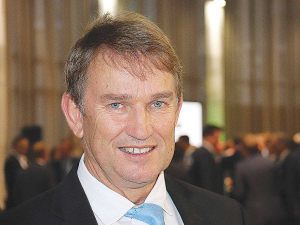 DCANZ chairman Malcolm Bailey has been nominated for the Outstanding Contribution Award at the Primary Industry Awards.

Dairy Companies Association of New Zealand (DCANZ) chairman Malcolm Bailey has been nominated for the Outstanding Contribution Award at the Primary Industry Awards.

He was a director on Fonterra's board from 2004 until 2016 when he retired from the position.

Also in the running for the Outstanding Contribution Award are farm investment manager Tony Cleland from FarmRight and Richard Lucas, a senior lecturer at Lincoln University.

Other notable nominations include NIG Nutritionals who were nominated for the Producer Award.

NIG Nutritionals are an Auckland-based company specialising in goat milk. Recently, they signed a deal to manufacture and commercialise products overseas.

Bevin Harris, science leader at LIC, has been nominated for the Science & Research Award.

Harris leads a group that uses analytical and learning models to interrogate and interpret data from the on-farm automated data capture of animals and the environment.

Ballance Agri Nutrients is also jointly nominated with Hiringa Energy for the Innovation & Collaboration Award for their Hydrogen project.

What happens in the next few weeks will be critical for New Zealand to secure a free trade agreement (FTA) with the UK.

'We want an Aussie-style agreement'

What happens in the next six weeks will be critical for New Zealand to secure a free trade agreement (FTA) with the UK, according to the executive director of the Dairy Companies Association (DCANZ), Kimberly Crewther.

After seven years, the Red Meat Profit Partnership (RMPP) came to an end on 31 March, yet chair Malcolm Bailey says it's work is "continuous".

OPINION: Hats off to the New Zealand dairy industry for telling its story to the world.

The story about the New Zealand dairy industry is about to become part of the total NZ story.