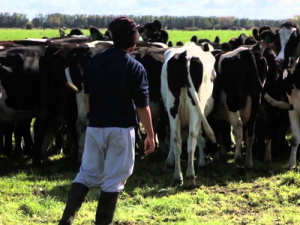 Aucklanders are looking to dairy as a career option, but more are still needed.

One in five of all people wanting to take up a dairy apprenticeship is coming from Auckland.

Primary ITO chief executive Linda Sissons says many more will be needed where they came from.

So far around 240 people have registered their interest in becoming a dairy apprentice – with over 40 of them from Auckland.

“It’s a good signal that dairying is a great career and starting out as an apprentice puts you on a premium pathway to leadership and even farm ownership,” says Sissons.

The dairy farming industry needs an estimated 17,000 new workers by 2025, and Sissons says with over 85% of New Zealanders living in urban areas, employers will be looking to the cities.

“We’re really pleased to see that Aucklanders are interested in learning to be dairy farmers. When we launched the apprenticeship programme with Federated Farmers, we wanted to encourage smart, innovative and ambitious people on to farms. One year in, it’s great that people around New Zealand are seeing the benefits of a dairy apprenticeship.

“The benefits of a dairy farming career in the regions, like affordable living and short commutes, are obvious and there are real benefits to the regions too from people joining their communities.”

At this stage, around 60 people have started apprenticeships, with the majority in Taranaki and Waikato.

Sissons says it’s particularly appropriate to have the function in Taranaki, where 18 apprentices have already started.

“It’s great that we can celebrate getting dairy apprentices on to farms in one of our dairy heartlands. Federated Farmers and Primary ITO are also seeking more funding from the Provincial Growth Fund for relationship managers to work with apprentices and employers in provincial areas. We believe this will be of real assistance to regions like Taranaki.”

Primary ITO will apply to the Ministry of Education for more Trades Academy places with demand from schools now outstripping supply.

Dairy farming is a hands-on industry, but Frankie Stevens discovered that understanding the theory and business practices that underpin a farm is the key to success, comments Primary ITO.

The 2007 national Farm Manager of the Year award winner Emily Woolsey (32) and her husband Daniel, of Southland, had a good grasp of dairy farming, says Primary ITO.

A dairy apprenticeship scheme jointly developed by Federated Farmers and Primary ITO could have 100 apprentices nationwide by June.